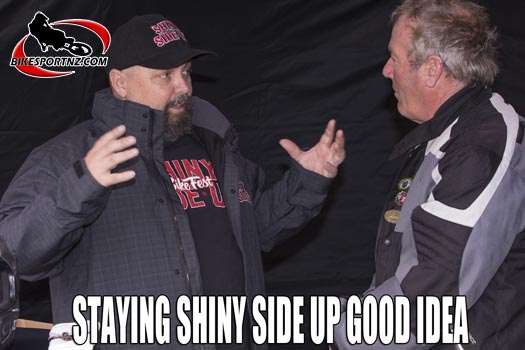 Staying shiny side up will definitely be the right thing to do when the second annual Mike Pero MotoFest motorcycling festival roars into life at Hampton Downs in just five weeks’ time.

This year’s Mike Pero MotoFest event, at Hampton Downs on March 2-3, will incorporate the third round of five in the 2019 New Zealand Superbike Championships, along with a slew of other motorcycling-related activities that will all pivot around the popular and proactive Shiny Side Up programme.

Shiny Side Up, a joint initiative between ACC and the NZ Transport Agency is a series of events run nationally that focuses on rider safety.

“The goal is to encourage motorcyclists to prioritise their safety, mainly by refreshing their skills with Ride Forever coaching, a training programme developed by ACC,” said Dave Keilty, ACC’s Motorcycle Programme Manager (pictured above, left).

“We think MotoFest is the perfect place to grow awareness around what we do and grow Shiny Side Up.”

Shiny Side Up was run around the same weekend as the inaugural Mike Pero MotoFest extravaganza at Hampton Downs last year so the organisers got together and realised a merger would benefit all involved.

“Once we looked at the synergies it was a no brainer,” says Hampton Downs Commercial Manager Mike Marsden. “MotoFest was a great success last year, as was Shiny Side Up so it just made sense to come together at the same venue so riders can enjoy the entertainment at MotoFest and benefit from the very important safety aspects Shiny Side Up promotes.”

“We have world-leading experts in their field flying in to be part of the Shiny Side Up events – Brittany Morrow (Road Rash Queen, USA), Chris Hurren (gear safety expert, Australia), Dave Moss (suspension guru, USA), and Kevin Williams (Survival Skills, UK). It will be a rare opportunity to interact with these experts face-to-face”

Shiny Side Up was started in Kapiti in 2016 and it has enjoyed huge growth over the years. It now comprises 11 events run nation-wide, bringing some real knowledge and experience into all areas of the country.

Shiny Side Up will have a large foot print at Hampton Downs and its involvement further endorses the multi-faceted MotoFest concept.

MotoFest will actually be the tenth appearance for Shiny Side Up this year – following events in Nelson, Christchurch, Kapiti, Napier, Gisborne, Tauranga, Taupo, New Plymouth and at the Burt Munro Challenge week near Invercargill. The eleventh event will be a talk series in Auckland on March 4, 6.30-8.30pm at Holiday Inn Hotel.

The Mike Pero MotoFest is rapidly becoming New Zealand’s premier motorcycle event of the year and this time around will again feature biking excellence on all fronts, with former champions (and perhaps future ones too), from across the entire motorcycling spectrum, all coming together for a massive weekend of fizzing bike action.

The MotoFest weekend will have a sharp focus on the nation’s elite in handlebar-to-handlebar national championship race action – with the second round of five having been staged at Levels International Raceway, near Timaru, just last weekend – but there’s plenty more besides.

The Legends Rider Clinic on Thursday, February 28, will have former Kiwi international Simon Crafar as one of its draw-card individuals.

The former MotoGP and World Superbike Championships star from Taihape (now based in Europe) will be one of the heroes riding several bikes of note in the Legends Track Sessions. Now a noted road-racing coach and mentor to the world’s elite, as well as a MotoGP commentator, Crafar will attend signing sessions and the Celebration Dinner on the Saturday night of MotoFest.

Mike Pero MotoFest will run with the same format that was introduced last time around and will again also include the popular Kawasaki Trail Ride, Motul Trials Challenge, Star Insurance Bike Show, Alpine Stars Dinner and the Shoei Classic, as well as the much-anticipated resumption of the national superbike championship series and the Shiny Side Up activities.

For more information on the Mike Pero MotoFest weekend, go to http://www.hamptondowns.com

More about Shiny Side Up can be found here https://shinysideup.co.nz