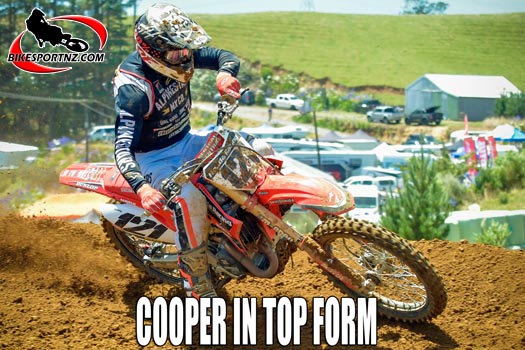 Be afraid, very afraid, Bay of Plenty’s Cody Cooper is on form and he means business.

The Honda star was in scintillating form at the weekend’s annual King of the Mountain Motocross in Taranaki, the event one of the last major outings before the four-round 2019 New Zealand Motocross Championships season gets underway.

Cooper (Alpinestars Motul Honda CRF450) showed up at the Barrett Road Motocross Park facility, on the outskirts of New Plymouth, for Sunday’s senior racing – the steep and tricky track already well battered from having the juniors race there on Saturday – and he wasted no time in pushing for glory in the premier MX1 category at the Mach 1 Yamaha-sponsored event.

It was important that he did too, because this track is the host venue for round one of the nationals in just two weeks’ time, on February 3, and he knew a good performance here would set him up nicely for his New Zealand title bid.

The six-time former national MX1 champion finished a close runner-up in the opening MX1 clash of the day on Sunday, crossing the finish line just 1.6 seconds behind fellow Mount Maunganui man Rhys Carter (Yamalube Yamaha YZ450F), but he cleared away in the next two races to register a 2-1-1 scorecard for the weekend and claim the outright class win for the King of the Mountain (KoM). 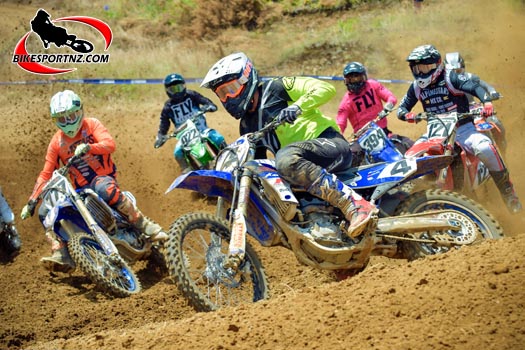 Mount Maunganui man Rhys Carter (Yamalube Yamaha YZ450F) gets the jump at the start of this MX1 class race at the King of the Mountain MX on Sunday. Photo by Andy McGechan, BikesportNZ.com

“It was a harder day than I expected. I wasn’t getting the good starts that I normally do,” confessed Cooper.

“Each time we changed something for the starts and, in the end, it worked out.

“This track is very hard to pass on. You’d get close to making a pass, but then you’d get roosted and lose all that ground again. I need to do some more practice on my starts.

“But I’m happy with the overall result today and I’m looking forward to coming back here for the nationals.”

All of this followed on from Cooper’s MX1 class win at the annual post-Christmas Honda Summercross at Whakatane and rang another alarm bell for his national championship rivals.

Cooper’s next assignment before the nationals is the big annual New Zealand Motocross Grand Prix at Woodville, also sponsored by Honda, this coming weekend.

Then it’s into the business of trying to reclaim the national No.1 plate, Cooper now well set up for a return to Barrett Road on February 3, followed by rounds in Rotorua (on February 17), then Pukekohe (on February 24) and, finally, the nationals wrap up at Taupo on March 10.

Oparau-based South Islander Reece Walker won the senior King of the Mountain feature race that wrapped up the weekend, finishing just ahead of Tauranga’s Micah McGoldrick.

The junior phase of racing at the King of the Mountain MX on Saturday was also edge-of-the-seat stuff and Whanganui’s James Rountree was perhaps the stand-out individual. 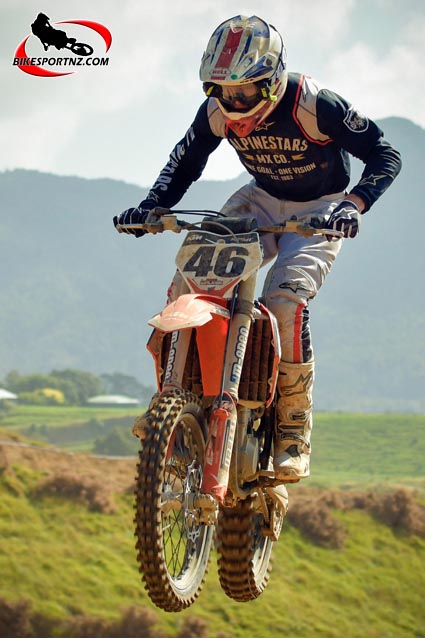 Also impressive was Whitford’s Brandon Draper, who won the junior King of the Mountain feature race after Manawatu sensation Luka Freemantle crashed while comfortably leading, less than two laps from the finish, speed and consistency therefore handing Draper the win in the signature race.