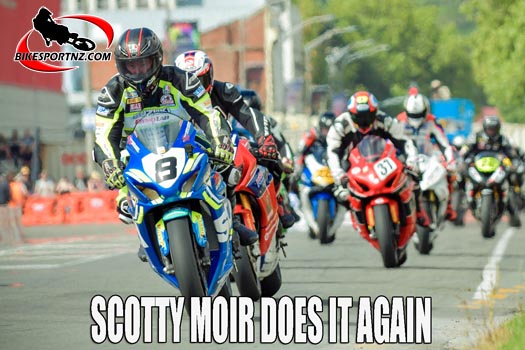 Suzuki hero Scotty Moir has done it again – for the second consecutive year, the Taupo man has won the popular three-round Suzuki Series.

The 35-year-old father-of-one was a breakthrough first-time winner last year of both the Suzuki Series’ Formula One class outright and the Robert Holden Memorial race, a 10-lapper that is the feature of the series’ final round on Whanganui’s Cemetery Circuit each Boxing Day, and he came agonisingly close to winning them both again this year too.

He had arrived at Whanganui on Boxing Day just three points off the lead in the glamour Formula One Superbike class – that advantage being enjoyed by Wainuiomata’s Shane Richardson – and eight points clear of third-ranked visiting British rider Peter Hickman.

But then Moir clicked it up a notch, taking his Suzuki GSX-R1000 to win the first F1 race on Boxing Day, while Richardson finished second, and suddenly there was nothing in it, these two riders level on points with just one race to go.

Moir was ahead of Richardson in the deciding F1 race early on and, when Richardson was forced to withdraw with mechanical problems on the third lap of 10, Moir knew a safe and sensible approach was all that was required for him to wrap up the crown.

He managed a safe fifth placing in that deciding race and this was enough for him to successfully defend his F1 title.

But then came more drama in the 10-lap Robert Holden Memorial feature race, the signature race of the Boxing Day event on Wednesday.

Moir was quick off the mark in that prestigious race and had quickly built a massive lead over the chasing bunch, setting a lap record in the process.

With Moir seemingly well in control, spectator attention switched to 2018 Isle of Man winner Hickman, the man from Lincolnshire back in about seventh position but on the charge and moving up quickly.

Hickman’s progress was stunning and, on the final lap he pounced on Moir, catching the Bay of Plenty man unaware and snatching the win just metres from the end.

“I always knew it was a possibility to win the Suzuki Series F1 class. I was good last year and I knew it was going to be tough this year, with such a stacked field, but when I knew Shane (Richardson) was out … I had the pit crew showing me board signals … I knew I just needed to finish where I was.

“Then I thought I’d go all-out in the (stand-alone) Robert Holden Memorial race. I led for every lap but then celebrated too early. I was pulling little wheelies … they weren’t even that good really. My pit board said ‘4 seconds’ and I thought ‘Oh, that’s a pretty good lead’. But I slowed down a bit much eh?

“I got a lap record in the Robert Holden race though, so that’s something.

“I have learned a lesson from this: Don’t celebrate too early and just race until the chequered flag.”

The Suzuki Series’ various venues – Taupo’s Bruce McLaren Motorsport Park, Manfeild Circuit Chris Amon in Feilding and then the public streets of Whanganui that make up the famous Cemetery Circuit raceway for the final round on Boxing Day – brought out the best in all the riders, but must now surely rate as Moir’s three favourites.

If he remembers the lesson he learned at Whanganui on Wednesday, then he should surely rate among the favourites to win the premier trophy at the 2019 edition of this popular series.

Meanwhile, the crowds at Whanganui on Boxing Day were thrilled to get right behind local hero Richie Dibben, the Kiwi international making his comeback from recent injury. He delighted with his Super Motard bike prowess on the tight and twisty circuit, taking his Suzuki RM-Z450 to win both Super Motard outings.

There was strong interest also in the GIXXER Cup class – reserved for riders aged between 14 and 21 years and all on identical Suzuki GSX150F bikes – where two young men had shared the glory in the earlier rounds of the series, Taupiri’s Zak Fuller and Hamilton’s Jesse Stroud, the son of Suzuki’s nine-time former national superbike champion and four-time former Suzuki Series champion Andrew Stroud.

In the end, it was Fuller who had all the answers at Whanganui.

Remember to mark the Suzuki Series’ December dates on your calendars for next year – the racing doesn’t get much better than this and you won’t want to miss it.

Check back here on www.BikesportNZ.com during this week as we bring you more words and photos from the Suzuki Series and Boxing Day.