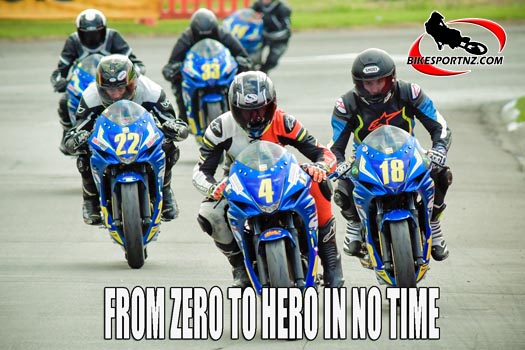 Fourteen months can seem like a lifetime for a 17-year-old, but still it’s hard to believe that it was only Christmastime last year that Taupiri’s Zak Fuller first climbed on board a road bike and started racing it.

Now he’s a fully-fledged motorcycle road-race champion, the young man accepting the challenge to race the GIXXER Cup class for the first time in the 2017-18 Suzuki Series, bravely switching from dirt to tarmac and tasting immediate success.

He finished fifth overall in the GIXXER Cup class during his road-racing debut season in 2017-18 and he returned for another crack at it this December, finishing first equal – level with Hamilton’s Jesse Stroud – after the Taupo and Manfeild rounds of the three-round Suzuki Series.

“That’s two years in a row that I’ve won at the Cemetery Circuit. That’s pretty awesome. I just love this track,” said Fuller.

“I’ve got a bit more experience under my belt this year. Last year I was a bit more of an amateur. Last year was a surprise win and this year I felt more confident coming here this time.

“It’s more about strategy than anything else. Thinking about what will win the race without blowing it on the last lap.”

The GIXXER Cup class, introduced to the New Zealand motorcycling scene first the first time last December, is reserved for riders aged between 14 and 21 years and all of them competing on identical Suzuki GSX150F bikes.

It is a seven-round series this year, with five more rounds left to run, incorporated within the five-round New Zealand Superbike Championships, which kick off at Mike Pero Motorsport Park in Christchurch on January 5-6.

According to some observers, this year’s GIXXER Cup contest has already been achieving even more than it did during its inaugural season.

“I think the young riders who have come along this year have been able to learn very quickly off the more-experienced riders we now have in the GIXXER Cup,” said Greymouth man Peter Fountain, father of GIXXER Cup sensation Clark Fountain – who finished third overall in the series last season and is third overall after the first two rounds this year. Clark Fountain is still too young to be eligible to race the Cemetery Circuit event on Wednesday.

“This season’s GIXXER Cup riders have been able to mimic and learn race lines and that sort of thing off the guys who raced this last season. I’ve spotted some young ones this year with great potential.

“It will be a closer competition this year than it was last year. The top runners from last year will be showing their experience, but the first-timers are definitely getting dragged along. And they’re catching up quick.

“What Suzuki has done her by creating the GIXXER Cup competition is great for the sport.”

Meanwhile, it was Taupo’s Scotty Moir who won the Suzuki Series’ premier Formula One Superbike class, the 35-year-old another former dirt biker who has managed to make a successful transition from soil to tarmac.

Moir was prominent on the motocross scene several years ago, before taking on Super Motard racing. He has been a leading New Zealand superbike racer for the past few years.

He finished with a national superbike ranking of No.5 last season.