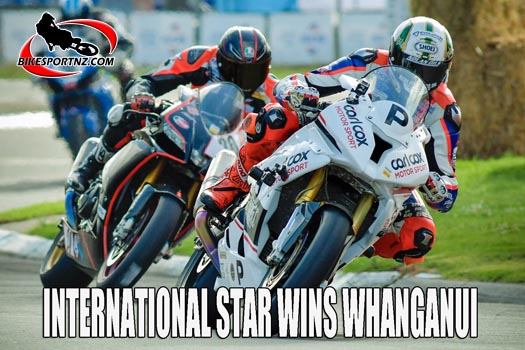 He may have started off a little slowly but, by the end of the 2018 Suzuki Series, British motorcycling superstar Peter Hickman showed he was very fast indeed.

A first-time visitor to New Zealand, the 31-year-old from Lincolnshire could hardly have been expected to dominate the leading Kiwis, each of them with many seasons under their wheels on the series’ various venues – Taupo’s Bruce McLaren Motorsport Park, Manfeild Circuit Chris Amon in Feilding and then the public streets of Whanganui that make up the famous Cemetery Circuit raceway for the final round on Boxing Day.

But Hickman demonstrated that he was a fast learner.

He is also the 2018 Isle of Man champion and so perhaps there really should have been no surprise that he would be a potent force in the glamour Formula One class.

He managed only 11th overall at the series opener at Taupo on December 9 – thanks to a little run-in with another rider and off-track excursion in one of his two races there – but then Hickman scored impressive back-to-back wins at Manfeild a week later and, with that, he rocketed up to third in the series standings. 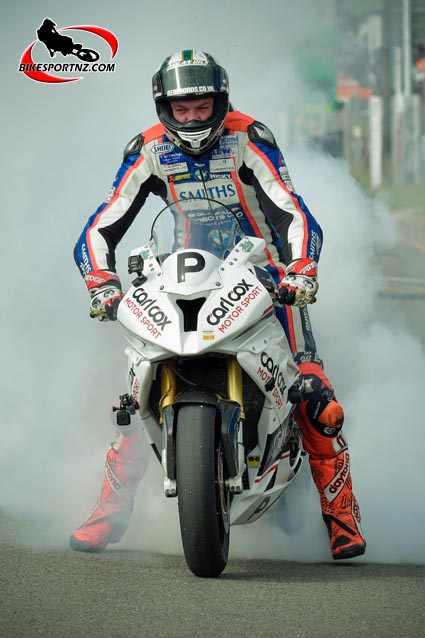 His Isle of Man experience really kicked into play at Whanganui on December 26.

No stranger to racing a break-neck speeds close to curbs, gutters, telephone poles and hay bales and this showed when he took to the streets of Whanganui for the traditional series finale on Boxing Day.

Hickman finished eighth and then third in his two F1 races at Whanganui, enough to see him rise from third overall and to settle for series runner-up in the class, but even better was still to come.

Stuck in traffic at the start of the 10-lap Robert Holden Memorial feature race, Hickman had his work cut out.

Taupo’s Scotty Moir, the F1 class winner for the series last year who had just taken his Suzuki GSX-R1000 to make it two-in-a-row by also winning the 2018 edition, was out in front in the feature race and fast disappearing into the distance, setting a lap record in the process, while Hickman was back in about seventh position.

Hickman dramatically cut his way towards the front and, on the final lap he pounced on Moir, catching the Bay of Plenty man unaware and snatching the win just metres from the end.

Everybody in the large crowd was on their feet and cheering. They had been royally entertained by road-racing royalty.

“I was too far back at the start here because of the lack of practice (on this circuit),” Hickman explained.

“I did six laps in practice and five laps in qualifying (on the Cemetery Circuit) and that’s just not enough. I was a long way back on the grid, in 11th, in both the F1 races.

“I got baulked a little bit at the start of the Robert Holden race and Scotty (Moir), to be fair, had just absolutely cleared off. He was well gone.

“I came through the pack and when I got near the front there were probably only two laps left. I was really in the groove and doing my own thing and then I saw that I was closing in loads on Scotty.

“He must have been watching his (pit signal) boards and backed off a bit, but he backed off a bit too much I guess. I thought to myself ‘this might be possible’, so just kept my head down and when he came out of the second-to-last corner he didn’t really gas it as much as he probably should have done and he braked slightly early too for the last turn and I thought ‘sod it’ and went straight underneath him.

“It must have made him jump, I would have thought, because he probably wouldn’t have been expecting it.

“I’m massively happy for the Carl Cox Motorsport crew because they’ve put in so much work. And thanks to the Cemetery Circuit and Suzuki Series’ man Flea Willacy for getting me over here. I was great for them letting me come and have a go.

“If all the cards fall right, I’d love to come back next year.”

Meanwhile, the crowds at Whanganui on Boxing Day were also thrilled to get right behind local hero Richie Dibben, the Kiwi international making his comeback from recent injury. He delighted with his Super Motard bike prowess on the tight and twisty circuit, taking his Suzuki RM-Z450 to win both Super Motard outings.

There was strong interest also in the GIXXER Cup class – reserved for riders aged between 14 and 21 years and all on identical Suzuki GSX150F bikes – where two young men had shared the glory in the earlier rounds of the series, Taupiri’s Zak Fuller and Hamilton’s Jesse Stroud, the son of Suzuki’s nine-time former national superbike champion and four-time former Suzuki Series champion Andrew Stroud.

In the end, it was Fuller who had all the answers at Whanganui.

Make sure you book the Suzuki Series into your calendars next season, you don’t want to miss out on action like this.

Leading standings after the final round of the Suzuki Series on Boxing Day are:

Check back here on www.BikesportNZ.com during this week as we bring you more words and photos from this series and Boxing Day event.