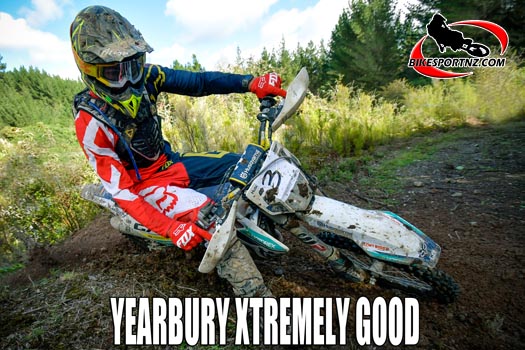 With nothing but podium finishes throughout the season, Cambridge’s Dylan Yearbury set a benchmark this year that was always going to be hard to beat.

Two runner-up results and a third-place finish meant that, even with him skipping one round, Yearbury had done enough to ensure it was he who would climb onto the top step of the rostrum at the four-round NZ Xtreme Off-road Championship series when it really mattered, after the final round was all done and dusted

By finishing third overall in Canterbury, behind Whitaker and Christchurch’s Hamish Macdonald, Yearbury was able to wrap up the series in the premier Gold Class, helped along by the fact that his main title rival and the early series leader, Hamilton’s Phil Singleton, opted not to make the trip to the South Island.

Yearbury, a 23-year-old diesel mechanic with an enviable record at these outrageously difficult events, was naturally well satisfied to take the series win in the Gold Class.

“I had a couple of small crashes on Saturday, just slow tip-offs in a creek bed. I was able to quickly stand up and carry on, but it did cost me some time,” Yearbury explained.

“The weekend went pretty smoothly for me and the bike was brilliant. I’m glad I managed to get the job done and win the series.”

Cambridge’s Beau Taylor won the Silver Class at the weekend and for the series, while Whitianga’s James Kerr topped the series’ Bronze Class standings.

Only three of the four rounds of the 2018 NZ Xtreme Off-road Championship were counted, with riders discarding their one worst score from the three North Island rounds – held near Whangamata, Porirua and Napier – while double points were offered for the weekend’s final round in the South Island.

The next major event for Yearbury is to tackle the final round of the New Zealand Grand National Cross-country Championships at Waimiha, in the King Country, in December.

“After that I will be preparing to contest the enduro nationals early in 2019.

“I wasn’t able to race the entire enduro nationals series this year because I went to Romania instead to work as a track manager at the world-famous Romaniacs hard enduro.

“I was over there for four months and it has certainly helped to make my riding sharper.”