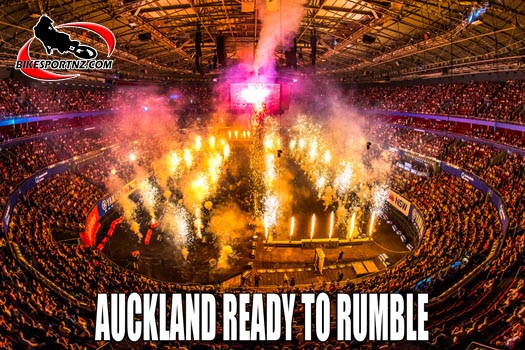 Brace yourself for perhaps the biggest supercross spectacle ever to hit New Zealand shores.

Australian motocross and supercross legend Chad Reed is just one of the many superstars expected to light up the sky over Auckland this Saturday night.

A popular many-time former visitor to New Zealand, Reed arrives this week to race at the second and final round of the Monster Energy S-X Open at Auckland’s Mt Smart Stadium on Saturday evening – the inaugural event also holding FIM Oceania Supercross Championship status – and he will be one of the favourites to win after his solid performance at round one in Sydney a fortnight ago.

With two United States supercross titles to his name, Reed has genuine star power and he has set his sights on winning the S-X Open Supercross International FIM Oceania Championship at Auckland’s grand finale.

The American dominated the first two races and eventually won the third and final race after Aussie hero Reed was stripped of his win after receiving a late race penalty, elevating Scotland’s Dean Wilson to the runner-up position.

Anderson is not making the trip to New Zealand, perhaps leaving the way clear for Reed or Wilson to dominate on Saturday, although nothing can be taken for granted in this most unforgiving of sports.

“When I heard (Justin) Brayton was heading to Auckland in November I rang the promoters and said, ‘I’m in’,” Reed said.

“Last time we went head-to-head in the Southern Hemisphere it was an all-time battle at the AUS-X Open, but I got the upper hand and I plan to take him down again in Auckland this year.”

Touted as one of the greatest Supercross showdowns New Zealand has seen, Reed, who was the 2016 AUS-X Open Sydney champion, says he is hungrier than ever at the chance to claim the glory after missing the second half of his 2017 season because of injury.

“I’ve never raced supercross in Auckland, so I’m really looking forward to heading there to compete for the first time, especially for the chance to win not only the S-X Open Auckland crown but becoming the first ever S-X Open International Supercross FIM Oceania Champion.

“I can’t wait to take on my old mate Ben (Townley) and the other Kiwis on their home turf. It’s going to be the ultimate rivalry of Australia versus New Zealand versus USA, a true supercross battle for the ages.”

“I spent many months in New Zealand back when I turned professional, I love the place and the people, so think it’s going to be an awesome event at Mt Smart Stadium,” Reed said.

The schedule for Saturday: