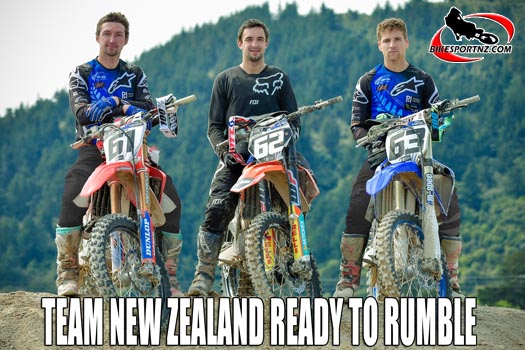 A talented three-man Kiwi motocross squad is all primed and fired up to race in the United States this weekend, determined to again challenge, and hopefully beat, the best riders in the world.

Every year, the Motocross of Nations (MXoN) lives up to its billing as the biggest and best dirt bike spectacle on the planet and the US national championship circuit at Red Bud, near Buchanan, in Michigan, will host the massive world teams’ racing event this Saturday and Sunday (Oct 6-7).

The MXoN, widely referred to as “The Olympic Games of Motocross”, is a one-weekend affair that brings together the word’s elite for an event where the racers put aside the past season’s bitter rivalries and unite instead along different battle lines, with three-rider teams formed to fly the flags of their respective homelands.

Team New Zealand could be one of the surprise packages at the event, the Kiwis having been on the podium at the MXoN on three separate occasions in the past – in England in 1998, in Belgium in 2001 and in England again in 2006 – and has also been among the top 10 finishing nations a further 11 times in the past 30 years.

The Kiwi trio again know it won’t be easy facing the world’s elite on such a massive stage, but each of them is determined to put on another good showing.

“I think this is one of the best teams we have had in a few years now,” said King, a rider who raced for New Zealand at the MXoN on 12 occasions and twice finished on the podium.

“I mean no disrespect to the teams we have had over the past couple of years, but this year we are a lot better organised and a lot more planning has been done. Bevan and I have worked together very closely on a lot of things. We have also been working to help develop this for the future too.

“Our expectations right now are just to qualify on Saturday. If our riders can put their best feet forward for every lap, for two races each, then it is possible that we can be on the podium.

“I realistically believe that we can be a top 15 team, maybe even top 10.”

The various three-rider teams at the MXoN are glittering with the biggest names in the sport, including riders from both the United States national championships scene and the predominantly European-based World Motocross Championships.

But, from rookie first-timers in 1984 to top-10 regulars just over 10 years later, Kiwi motocross riders have always boxed well above their weight and often rated among some of the best in the world, although last year’s efforts fell some way short.

The Kiwi team last year failed to qualify for the main races in the treacherously-muddy conditions in the UK. They were eventually credited with finishing 21st overall, a rare occasion that New Zealand has not ended up in the top half of the field.

France won the 2017 event overall, finishing ahead of The Netherlands and Great Britain, the fourth consecutive time they have won the MXoN.

These motocross “powerhouse” countries, along with Belgium, Switzerland and Italy, are favoured again this year, with the Americans also fancied to excel at home.

Cooper is one rider in particular who should feel right at home in the US this weekend, the Honda rider having been an integral part of nine MXoN campaigns in the past, not to mention the fact that he spent much of this year racing the US nationals, with one round of that series even staged at the same Michigan track that will be used this weekend.

His wealth of experience could be the difference between the team earning a top 10 result this weekend or failing to qualify among the 20 countries that will reach the final stages of the competition on Sunday.

A top 10 result would be considered a massive achievement for the Kiwis, especially considering that New Zealand is one of the smallest countries and they have the furthest to travel.

With generous support for this year’s campaign coming from the sport’s governing body here, Motorcycling New Zealand, and from building company Penny Homes, along with massive fundraising undertaken by the Taupo Motorcycle Club with their Battle of the Clubs motocross event in June, the Kiwi contingent leave for the US this week in a confident mood.