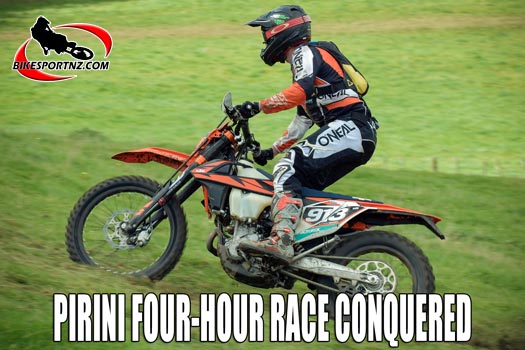 It looks like it’s business as usual for KTM pair Sam Greenslade and Tom Buxton after they shared riding duties to score an impressive win at the weekend’s annual Pirini 400 four-hour motorcycle endurance race near Te Puke.

Third best on the day was Rotorua pair Scott Birch and Callum Dudson, finishing the race another two minutes further back.

“We decided that Tom should be the rider to start, because he was on the bigger 350cc bike,” explained the 28-year-old Greenslade.

“He got a decent start and was in fifth at the end of the first lap, behind Ben Townley (Tauranga), Kayne Lamont (Hamilton), Cam Negus (Rotorua) and Callan May. I took over for my first stint on the track and went pretty hard out … I took the lead for our team on that second lap and we never looked back from there.

“Each lap took about 35 minutes and I was good with that. I had injured my knee earlier in the season, putting me out of the enduro nationals, but I’m fully recovered now and it was good to get another win under my belt.”

Greenslade had also won his previous outing, taking the glory at round three of the NZXC cross-country series in the Woodhill Forest, west of Auckland, two weeks ago.

Buxton was also pleased to be back on form so soon after returning from his non-racing trip to the Romaniacs event in Romania. He had won the opening two rounds of the New Zealand Enduro Championships in April, before heading overseas and abandoning his challenge for that title.

Both riders will now be looking to continue their current winning form, each of them riding as individuals, at the next round of the NZXC series at Matata in just over a week’s time.