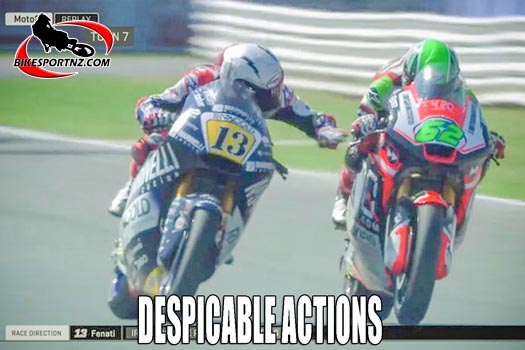 News in overnight is that Romano Fenati has been fired by the Marinelli Snipers Team for his despicable behaviour at the weekend.

He grabbed his rival’s front brakes while the pair were racing alongside one another at close to 200kmph at Sunday’s Misano Moto2 Grand Prix, his extremely dangerous act causing outrage in the motorcycling community.

The Marinelli Snipers Team has terminated the contract with Fenati for his “unsporting, dangerous and damaging conduct for the image of all”.

The team spokesman said: “With extreme regret, we have to note that his irresponsible act endangered the life of another rider and can’t be apologized (for) in no way.

“‘The rider, from this moment, will not participate anymore to a race with the Marinelli Snipers team.

“The team, Marinelli Cucine, Rivacold and all the other sponsors and the people that always supported him, apologise to all the World Championship fans.”

Fenati has already been announced as joining the new MV Agusta Moto2 project next season, to be run in partnership with the Forward Racing team which Manzi currently rides for.

“Regarding his contract for a future position as rider of MV Agusta Moto 2, I will oppose myself in every way to stop it. It won’t happen, he doesn’t represent our company’s true values.”