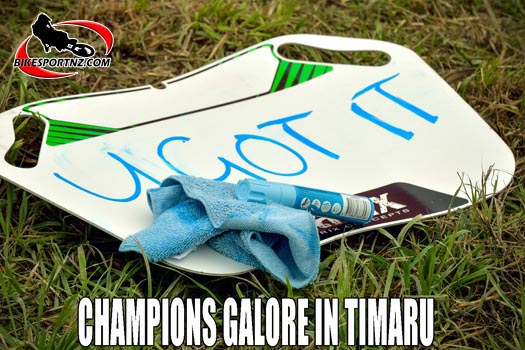 It was champions galore at the 2018 edition of the annual New Zealand Veterans’ and Women’s Motocross Championships near Timaru at the weekend.

Former national motocross champions, a former rugby champion and a visiting international FMX star all locked handlebars at the two-day event at Southburn, near Timaru, on Saturday and Sunday and put on a stunning show for the large crowd in attendance.

Sponsored by Timaru Yamaha, the popular annual event featured many riders who, despite their veteran status, still rate among the sport’s elite, while the female side of the sport that shared the race programme was just as intense.

The 33-year-old builder won all five race in his veterans’ 30-34 years’ class and then also won the Champion of Champions feature race that wound up the weekend, his win in that feature race despite his handicapping himself by facing backwards on the start gate.

“I’m semi-retired now, wrapped up with building my family home. My wife (Nikki) and I have two children, three-year-old Skye and 13-week-old Blue, so I’ve been too busy to race much,” said McDonald. 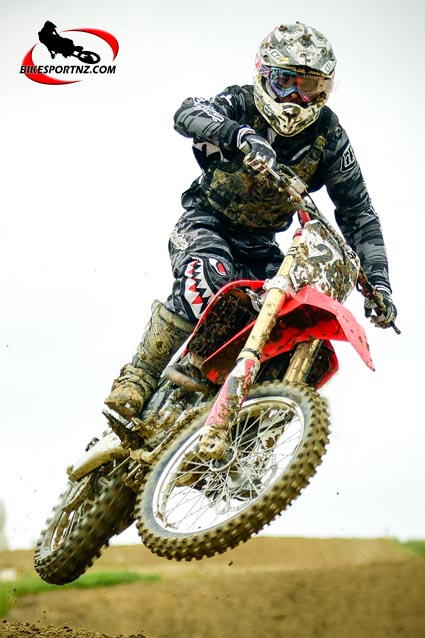 “It was great to be out on the track again though, racing against some of the guys I used to battle with back in the day.

“I faced myself backwards on the start gate for the feature race, but I still got there in the end,” he laughed.

Former Otago rugby captain David Latta from Balclutha, was another former national sporting hero in action at the weekend, albeit from a very different code, and he won the veterans’ 55-59 years’ class title.

An added attraction at the weekend was the surprise, last-minute appearance of international Freestyle Motocross ground-breaker Carey Hart, husband of rock star Pink, who was on a concert tour of the country.

With a little help from Motorcycling New Zealand, the 43-year-old Hart was able to indulge in “a little bit of a skid” at day one of the veterans’ nationals.

“Wow, I had so much fun racing today,” he said afterwards “Can’t believe how good the track was.

“It’s great to see motocross alive and doing well in New Zealand. Can’t wait until the next time.”

For the record, the American rider managed two fifth-place results and a 10th in the veterans’ 40-44 years’ class on Saturday and was unavailable to race on Sunday.

Hart’s celebrity status resulted for the organisers in the kind of publicity money could not buy.

Media attention spiked and as many as 1000 extra fans came through the gates to the race at the Southburn farm, a event that organisers had only been expecting a “couple of hundred” to attend.

The event organiser, MNZ board member Noel May, said the weekend was “perfect in so many ways”.

“We were a wee bit worried about the weather, because rain had been forecast, but nothing came until after all the racing was completed on Sunday afternoon. We were a bit lucky,” he said.

“I was really proud of the track we were able to provide  and the racing was exceptional. The riders all loved it … it was natural, old-school style.

“It was great to have Carey Hart show up. He was a really chilled-out guy and signed heaps of autographs. It was great for the sport to have him come here and he remarked that the track was ‘just heaven’ and better than anything he rides on back home.”