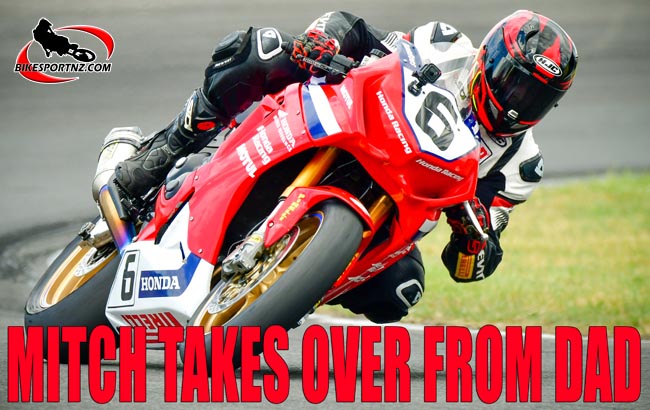 As one Honda rider called Rees steps aside, another one steps forward.

Whakatane’s Tony Rees is the 2017 national superbike champion, but the opportunities for him to run out with the No.1 emblazoned across his blood-red Honda motorcycle have been few and far between.

An accident at the second round of three in the pre-nationals Suzuki Series in December saw Rees left with a broken hand, an injury serious enough to not only prevent him defending his No.1 ranking in that series, but, with the 2018 New Zealand Superbike Championships kicking off in Christchurch just a couple of weeks later, it also wrecked any chance he had of defending his national title.

The nationals began at Mike Pero Motorsport Park in Christchurch on Saturday and Sunday and, even though sidelined and with his arm in a plaster cast, Rees was still there, in body and spirit too.

His eldest of two road-racing sons, Mitchell Rees (Honda CBR1000SP1) has been something of a revelation this summer and the fairytale continued in Christchurch at the weekend.

In just his second season of road-racing and with barely 20 races in total under his wheels – but with his multi-time champion father to guide him – the virtual novice clinched third overall in the Formula One class in the 2017 Suzuki Series and he’s now backed that up by finishing second-equal in the premier superbike class at the weekend’s first of four rounds of the nationals.

Mitchell Rees finished with a national ranking of No.6 on his debut season of superbike racing last year and that was an incredible feat in itself, but now he’s one of the sport’s “big boys”, a true title contender.

The 24-year-old finished with a 2-2-3 score-card in Christchurch at the weekend and that places him second equal, level with Glen Eden’s former national 600cc champion Daniel Mettam in the standings after round one.

After this initial flurry of activity, Rees and Mettam are just one point behind Wellington’s Sloan Frost in the championship standings and there’s no time to catch a breath, with round two set for Levels Raceway, near Timaru, this coming weekend.

“I was two seconds a lap quicker on this Christchurch track than I was last year and I put that down to two things … the bike handles just so well and I’m another year older with a little bit more experience now,” said Mitchell Rees.

“I was trying to get over the flu at the weekend too, although I don’t want to make excuses.

“I got a little bit tired in the races and I think I need to improve my fitness but, equally, I didn’t want to do anything stupid and end up crashing. A crash would have cost me any chance of winning.”

He now heads to round two in a confident mood.

After racing at Levels this coming weekend, the riders will cross Cook Strait for the second half of the season in the North Island.

North Waikato hosts round three at Hampton Downs Motorsport Park, near Meremere, on March 3-4, before it all wraps up at Bruce McLaren Motorsport Park in Taupo on March 17-18.