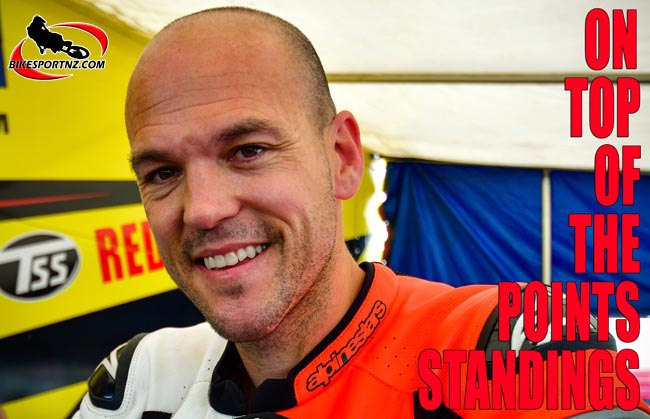 A “bit of a rev-up” from his wife was enough to spur Wellington’s Sloan Frost to victory at the opening round of this year’s New Zealand Superbike Championships in Christchurch at the weekend.

Mike Pero Motorsport Park hosted the first of four rounds in this year’s series and that probably suited the Suzuki hero, the 2016 national superbike champion having twice before won the NZGP superbike trophy at this venue.

He won the weekend’s third and final superbike race at Christchurch on Sunday too, now making it three times in a row that’s he’s won that separate additional honour.

“I made a rookie mistake in race two and slowed down on the white-flag lap, thinking it was all over (and eventually finished third). I got a bit of a rev-up from my wife following that. She called me an ‘old man’ and that fired me up for the last race.”

But perhaps of most importance to Frost (Suzuki GSX-R1000A) is the fact that, coupled with his two thirds earlier, the NZGP race win helped him secure the No.1 overall position for the weekend, setting him up for the three rounds that now follow, and offering a foundation on which he might build a title-winning campaign.

However, there were actually three different winners in the premier Superbikes class and Frost can’t afford to rest on his laurels, with just one point to separate the leading three riders on the championship table.

Christchurch’s Alastair Hoogenboezem (BMW1000RR) won the first Superbikes race of the weekend on Saturday, but, unfortunately for him, he crashed out of the second race the next day, putting a serious dent in his title bid.

Glen Eden’s Daniel Mettam (Suzuki GSX-R1000A) won the second Superbikes race and, coupled with his fifth in race one and runner-up finish in race three, it put the 21-year-old second-equal overall in the standings.

Frost had seemed to take a while to get going, but, once he was warmed up, he was very hot indeed.

Frost won the third and final 18-lap Superbikes race of the weekend, earning himself the NZGP trophy, and it was enough for him to zip past his rivals and onto the top of the points table.

Whakatane’s Mitchell Rees (Honda CBR1000SP1) followed up his sensational pre-nationals Suzuki Series performance with more solid results – the 24-year-old finishing with a 2-2-3 score-card in Christchurch at the weekend – and the Honda man finds himself second equal, level with Mettam, in the standings after round one.

Winner of December’s Suzuki Series, Taupo’s Scott Moir, had been among the favourites to win the New Zealand Superbike Championships this season, but he had a weekend to forget in Christchurch after he finished fourth in the first Superbikes race, but then crashed out of race two and failed to finish race three because of a technical problem, the bolt securing his gear-change lever breaking away.

With Suzuki man Moir unable to score points in two of the weekend’s races – and only 12 superbike races in the entire four-round series – it leaves him 12th in the standings and with a massive task ahead of he’s to even catch the leaders.

Fellow Suzuki rider Mettam was naturally pleased to find himself in strong contention.

“I’ve had a lot of bad luck here (in Christchurch) in previous years, so this is a good start for me.”

As for Frost, he was understandably thrilled with the way his weekend finished up.

“I guess I’m a bit of a technical rider and like to have everything perfect. By the end of the weekend it was feeling perfect for me and I got the win.

“We had a few problems and a crash during the Suzuki Series, but I think we’re all sorted out now. I’ve got a really good team behind me.”

Race fans won’t have long to wait to get their next adrenaline fix, with round two of the championships set for Timaru’s Levels International Raceway in just one week’s time, on January 13-14. North Waikato hosts round three at Hampton Downs Motorsport Park, near Meremere, on March 3-4, before it all wraps up at Bruce McLaren Motorsport Park in Taupo on March 17-18.