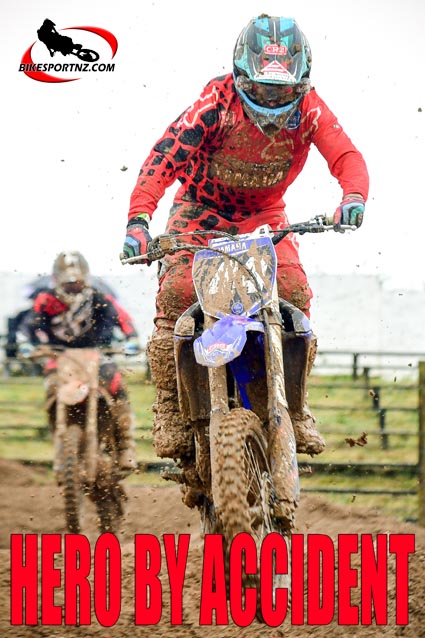 It’s not often that Josh Coppins could be called an ‘accidental hero’, but that’s what he was at the opening round of the New Zealand Supercross Championships in Tokoroa on the Monday of Labour Weekend.

The now-retired former Grand Prix motocross star from Motueka, the boss of the high-profile Altherm JCR Yamaha Racing Team, was left with a minor problem when his 250cc class rider, Mangakino’s Maximus Purvis, crashed out of the MX Fest motocross event in Taupo on Sunday.

Purvis, alongside 450cc team-mate Kayne Lamont, were scheduled to also race at the supercross nationals opener the following day.

So there was only one thing for it … Coppins would step into the role of the Yamaha team’s 250cc class rider for the supercross.

It had been more than a decade since Coppins had last raced supercross at the Tokoroa track and Purvis’ bike wasn’t set up for the heavier, 40-year-old Coppins.

But, with a quick switch of suspension parts, replacing Purvis’ shock with a stock one from the parts box, and a couple of pairs of borrowed goggles, and Coppins was good to go.

Coppins then proceeded to clean sweep all three SX2 (250cc) class races, twice finishing ahead of Tauranga’s Micah McGoldrick – the man who had finished first-equal in the class last season – and beating Hawke’s Bay cross-country ace Reece Lister to the chequered flag in the final race.

The phrase ‘clean sweep’ was only appropriate in terms of the results, however, because the racing was anything but clean, with persistent showers drenching the track and turning it into a muddy mess.

But Coppins’ many years of international experience came to the fore and he now heads to the second and final round of the national series near Winton this coming Saturday with a 15-point lead over Lister in the championship chase.

Honda’s McGoldrick crashed out of the day’s final SX2 race at Tokoroa, although he’s still third-equal in the standings, sharing the final podium spot with Nelson Yamaha rider Clayton Roeske.

“My riding these days is more in a test-rider capacity, so I didn’t find this easy,” said Coppins afterwards.

“I struggled with rhythm, flow and the intensity of racing.

“I had promised the supercross organisers that we’d enter a rider in each class and I didn’t want to let them down. I will ride the bike at Winton this coming weekend too because I want to support Jim Cooper, the track owner there.

“It’s a real bonus to be able to turn up there with the championship lead too,” he laughed.