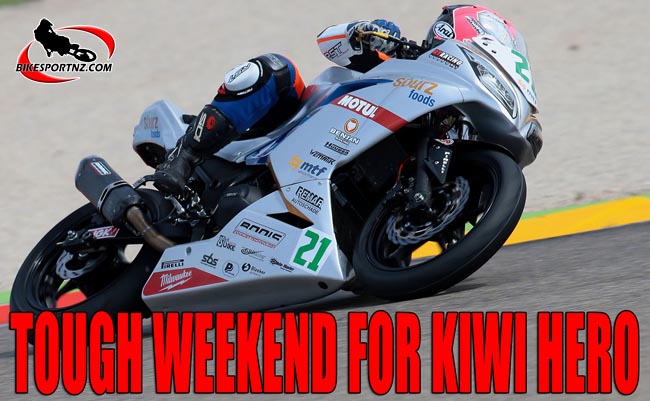 It was a difficult weekend for New Zealand’s Avalon Biddle in her World Supersport 300 class event at Aragon, in Spain, at the weekend as she suffered a DNF “due to a technical problem”.

She had also earlier crashed during superpole and was therefore 28th on the starting grid.

The event was also round three of the World Superbike Championships.

Biddle, who has won the FIM European Women’s Cup for the past two years running, is now competing amongst some of the fastest males in the world as one of only two females entered in the series.

Riding for Sourz Foods-Benjan Racing, an experienced Dutch team also contesting the European Stock1000 class, she plans to compete in the nine races throughout Europe aboard the team’s Kawasaki Ninja 300. She is the sole rider in the team contesting the 300 class.

Her result at Aragon was unfortunately not as expected and the team says there is still some work to be done on her Kawasaki Ninja 300.

More testing is now planned to give the highly-motivated Biddle, from Orewa, a better chance at the next race at the Assen TT Circuit.

“Thanks again for the amazing support everyone, especially my major sponsor MTF Vehicle Finance, round sponsor Bryce Campbell Car Sales, and Connor and Phil London from WIL Sport for the Kiwi support over the weekend and loan of some gloves for the race,” said Biddle.

“Also, thank you to all my amazing sponsors who make this possible; you all deserve that good result we will keep working for.”

On the final lap both riders were elbow to elbow down the long back straight towards the final corner with Mahias cutting up the inside at the corner exit to carry enough speed to take the chequered flag by just 0.014s from Morais.

Meanwhile, British Kawasaki ace Jonathan Rea said he is not concerned about losing his 100% record to the start of the 2017 World Superbike championship after having finished second behind Ducati’s Chaz Davies in race two at Aragon, as he still managed to extend his title lead in the WSBK class to 50 points.

The two-time World Superbike champion lost out in a gutsy final lap duel against Davies having seen the Welsh rider crash out while leading in Saturday’s race but after the factory Ducati rider made a flawless charge from 10th on the grid Rea held his hands up at being beaten for the first time in 2017.

Despite gunning for a sixth consecutive race win Rea has paid credit to Davies for his victory as he targets the top spot in Assen.

“When Chaz came past he had a little bit more pace and I upped my own pace to try and go with him,” Rea said. “He made a few mistakes but none that meant I could really go through clean on him and make it stick. On the last lap I just fought – fought for a win. I tried in a few places but it did not work out in the end.

“We can’t complain too much because on one side of the circuit we were really strong. Congratulations to Chaz because to come back from a big crash yesterday and win today was really impressive.

“I am really happy with the way I rode today and I got 45 points this weekend, even though I was not feeling my best. But the bike was working really well so I am looking forward to rolling to Assen now.”