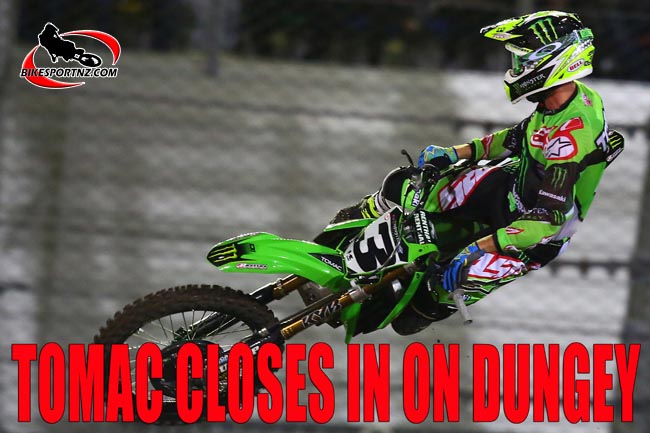 Round 11 of the United States supercross championships thrilled more than 60,000 fans inside Lucas Oil Stadium in Indianapolis at the weekend.

Monster Energy Kawasaki’s Eli Tomac took his third straight 450SX Class victory, and his sixth win of the season and closed in on series leader Ryan Dungey, who managed third at Indianapolis.

Dungey seized the opportunity to move past his championship rival, Tomac, for second on the opening lap, but the Kawasaki rider responded a short time later to reclaim the position.

Tomac quickly applied pressure on Baggett for the lead, and took over the top spot on Lap 2. Dungey didn’t waste any time following through and moved into second not long after. The championship’s top two riders were separated by less than a second for several laps until Dungey bobbled in the whoops, allowing Tomac to pull out to an advantage of a couple seconds.

The leaders opened a large gap over Baggett in third at the halfway point of the Main Event, leaving the KTM rider to fend off Team Red Bull KTM Factory Racing’s Marvin Musquin for the final podium spot. On Lap 11 Baggett crashed out of third, handing the spot to Musquin before remounting in fourth. The Frenchman then set his sights on his team-mate in second, inching closer lap by lap. Soon the KTM duo was separated by mere bike lengths, which allowed Musquin to apply pressure on Dungey. They battled over the course of a couple laps before Musquin successfully made the pass on Lap 19.

Tomac went unchallenged over the final portion of the Main Event and crossed the finish line 5.8 seconds ahead of Musquin for his ninth career win. He became just the fourth different winner in nine races inside Lucas Oil Stadium. Dungey followed in a distant third, ending a three-year reign in Indianapolis.

“This [season] is everything you could ever dream of, other than winning the championship. Right now we’re winning races, so it’s pretty cool. I don’t know what to say, we’re rolling right now. This is good for us. We’re doing what we need to do, but we’ve got to keep doing it.”

Tomac closed his deficit to Dungey in the 450SX Class standings to just 12 points with six races remaining. Musquin moved into a tie with Team Honda HRC’s Cole Seely for third, 49 points behind Dungey.

“It was a little rough for us today. It’s just how it goes, and I can’t really explain why other times are harder than not,” said Dungey, who secured his ninth podium finish of the season. “We did our best tonight. In the Main Event we had the insight gate, and I was able to get out good and be right up front with [the leaders]. I was able to put pressure on Eli [Tomac] for a bit, and then I just fell off the pace. It’s plain and simple. I gave it my all.”

The Eastern Regional 250SX Class Main Event saw Monster Energy/Pro Circuit/Kawasaki’s Joey Savatgy grab the holeshot over Osborne and RMATV/MC-WPS-KTM’s Dakota Alix. Both Savatgy and Osborne were able to assert themselves out front, but Alix dropped a couple positions to the Troy Lee Designs/Red Bull/KTM duo of Alex Martin and Jordon Smith.

Just six points separated Savatgy and Osborne atop the Eastern Regional standings entering the night, and the lead duo sat mere bike lengths apart throughout the early portion of the Main Event, while both Martin and Smith kept them within sight. After showing his wheel to Savatgy on the inside of several corners over the course a handful of laps, Osborne pulled the trigger on Lap 9 coming out of the whoops and dove inside Savtagy, making contact and moving into the lead. From there he was able to open a gap of over a second as the leaders approached lapped riders.

Behind the top two Martin and Smith continued their battle for third, pacing one another throughout the race. On Lap 11 Martin lost control of his KTM entering a corner and was launched off the bike, forcing Smith to stop and make his way around the downed motorcycle. Smith lost valuable time to the leaders, but took over third while Martin remounted his bike in fourth.

Osborne was able to maintain his advantage over Savatgy throughout the remainder of the race and opened up an even larger gap on the final lap, taking the checkered flag 2.2 seconds ahead of Savatgy, who recorded his second straight runner-up finish. Smith followed in third.

“I felt like half the track Joey [Savatgy] was way better than me, and on the other half I had a little advantage. We were tit for tat,” said Osborne, who has won all three Main Events this season by passing for the lead. “Even after I passed [Joey] he was right there the whole time. It was a great race. I wasn’t able to hit [all the obstacles] in the fastest way, so I had to bide my time [before making the pass].”

The win allowed Osborne to pull out to a nine-point lead over Savatgy, while Monster Energy/Pro Circuit/Kawasaki’s Adam Cianciarulo sits third, 18 points out of the lead following a fifth-place finish.

The 2017 Monster Energy Supercross season continues next Saturday, March 25, for the 12th round of the championship inside Detroit’s Ford Field.