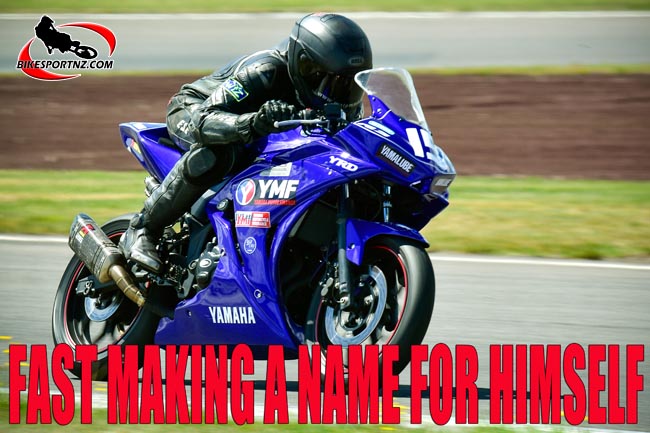 The 19-year-old from Upper Hutt qualified fastest and then finished 1-1-2 in his three outings in the lightweight production class at the weekend’s fourth and final round of the New Zealand Superbike Championships at Hampton Downs, enough to earn himself a solid runner-up finish in the championships.

The rider who won the title this season, Christchurch’s Andy McLaughlin (KTM RC390), can probably count himself a little fortunate that apprentice builder Chandler didn’t contest the entire series, because he won five of the nine races he did enter this season.

Chandler had started the weekend only fourth in the series standings, but his performance at the North Waikato circuit thrust him onto the podium, albeit still 43 points below the No.1 spot of McLaughlin.

Even with Chandler riding just three of the four rounds – and his first “dabble” was an unplanned one, on a borrowed bike at the series opener – he still managed to outscore 20 other entrants in the lightweight production class.

Following his introductory ride in the series at Ruapuna in January, Chandler was forced to skip round two at Teretonga as he underwent “surgery on a leaking appendix”.

A month later and Chandler took delivery of his own, new Yamaha YZF R3, just two days before the third round of the series at Taupo. However, even with only limited time to get suspension and handling set to his desired preferences, he was quickly on the pace on the 300cc machine.

And, while he may have been up against the 390cc bikes of many of his rivals in the Lightweight Production class, Chandler was able to score 8-3-8 results on the borrowed Yamaha YZF R3 machine at Ruapuna and then go on to run away with a stunning hat-trick of wins at Taupo a month later, before scoring another clean sweep of wins at Hampton Downs on Saturday and Sunday.

“I didn’t think I’d be able to claw that many points back on Sam (Goulter). I think the South Island guys may have struggled a bit with the North Island tracks.”

Chandler will race a Norton Commando at the Central Sound of Thunder race meeting at Manfeild in April before turning towards preparation for next season.

“I need to organise a (600cc) Yamaha R6 and do some testing with it, so that I will be ready for next season. With people like (engine wizard) Dave Cole and (suspension guru) Robert Taylor to back me up, I think I’ll be on the pace with the R6 straight away. Even as a stock machine it’s capable of winning races.”