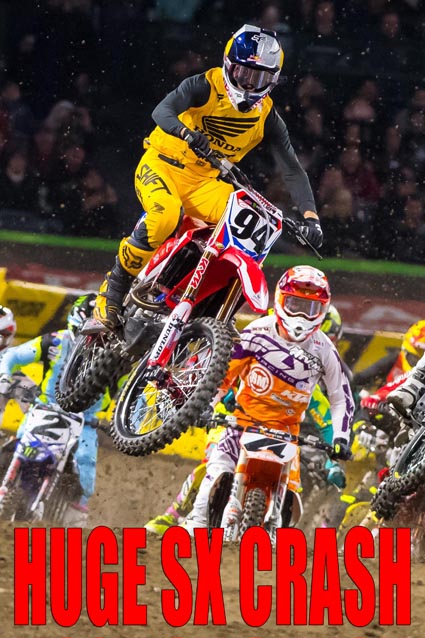 The often-used phase ‘to finish first; first you must finish’ could not be better to describe what happened at round three of the United States Supercross Championships at the weekend.

Germany’s Ken Roczen won the first two rounds of the championship but crashed out at round three and now it’s ‘Mr Consistency”, Ryan Dungey, won took the win at Angel Stadium, in Southern California, and he now leads the points standings.

The HRC Honda team has confirmed that Roczen suffered a compound fracture in the lower left arm from the crash.

After back-to-back runner-up finishes in the first two rounds, KTM’s Dungey led the entire way in the 450SX class main event, while, in the Western Regional 250SX class, Kawasaki’s Justin Hill was dominant, also leading his race from start to finish.

For Dungey, it was his 32nd career win, and his fifth victory in Anaheim, by 2.7 seconds over his team-mate, French rider Marvin Musquin, giving KTM a 1-2 finish. Honda’s Cole Seely followed in third with his first podium result of the season.

“I didn’t have the greatest gate pick, but I got out of the gate good. I got out front and I could see the [pit] board, and I knew Ken [Roczen] was coming,” said Dungey.

“I hope he’s ok. He’s been right on my heels and the pressure was on. You’re either going to fail or go after it and he just kept pushing. The track was nasty. It deteriorated quick and I just focused on hitting my lines and hitting my marks.”

The defending champion has taken over the top spot in the points and will carry the red number plate beginning next weekend.

Dungey now holds a seven-point lead over Musquin, while Roczen dropped from first and into a tie for third with Seely, 18 points out of the lead.

Prior to the main event, Husqvarna Factory Racing’s Jason Anderson was disqualified from competition by race officials, resulting from an incident with Honda’s Vince Friese following the pair’s heat race.

Anderson had finished fourth in each of the previous two rounds and entered the night fourth in the championship standings. He is now down in ninth overall.

RESULTS & STANDINGS AFTER ROUND 3: