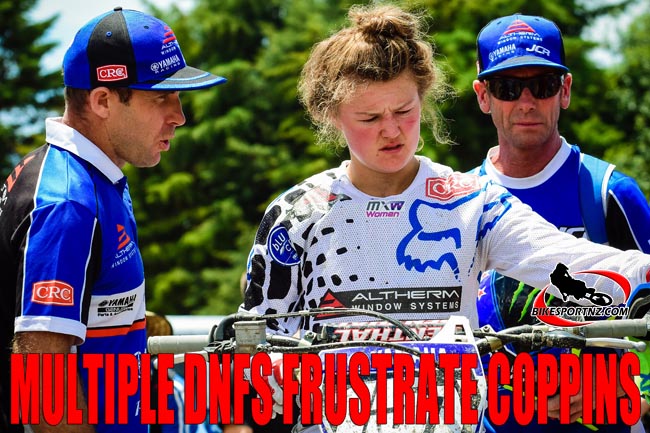 It was a very mixed bag of results for the high-profile Altherm JCR Yamaha Racing Team this week and it has team boss Josh Coppins seething.

With the potential to take titles in all of the premier grades, the former motocross Grand Prix star was not happy that his riders were unable to finish some of the fine work they started during the senior day of racing at the big annual Whakatane Summercross on Tuesday.

The popular post-Christmas “blow-out” event is typically a chance for teams and individuals to get themselves set up for a busy season that follows, particularly the four-round New Zealand Motocross Championships that kick off in Timaru on February 5.

Visiting Australian MX1 champion Dean Ferris qualified his Altherm JCR Yamaha YZ450F on pole position early in the day but then crashed spectacularly seconds after taking the lead on the first lap of race one.

The impact was so severe that his goggle lens popped out and cut his face very close to his eye. He was out for the day and sent to hospital to get checked out. Fortunately the damage was minor and he’ll be fit and fired up for the rest of the Kiwi summer of racing.

The team’s other MX1 class rider, former national MX2 champion Kayne Lamont, of Mangakino, was also among the leading riders in the class until he too crashed out of contention.

Riding for the Altherm JCR Yamaha Team in the MX2 class, Ethan Martens put in a solid day of work to finish fourth overall, but that was a rare bright spot for the team.

The team’s second MX2 rider, Otago’s Courtney Duncan, crashed and hit her head in the day’s second race. She scored impressively in the remaining races – including her clinching a runner-up finish behind fellow Kiwi international Josiah Natzke – but the one DNF proved costly and she was forced to settle for 11th overall for the day.

It was some consolation that she dominated the women’s class, however, qualifying on pole and winning all three women’s races.

“This was just not good enough,” Coppins fumed afterwards. ”

“I am not happy with my riders at all. I was not putting pressure on them for top results here. I just wanted them to finish races. There were too many DNFs here and I want that to stop.

“There were a few positives to come out of the event, but nothing too much to crow about. Courtney (Duncan) winning the women’s class was what we expected but what happened with Dean (Ferris) was simply a mistake from him and he admits it. Luckily he’ll be healthy for the big events coming up.

“We are getting close to the important part of the season now and we’re running out of time to get things right. Maybe being a part of a team like this brings a certain amount of pressure with it, but I’m pretty frustrated. There are a lot of people putting in a lot of work and to finish first, first you must finish.”