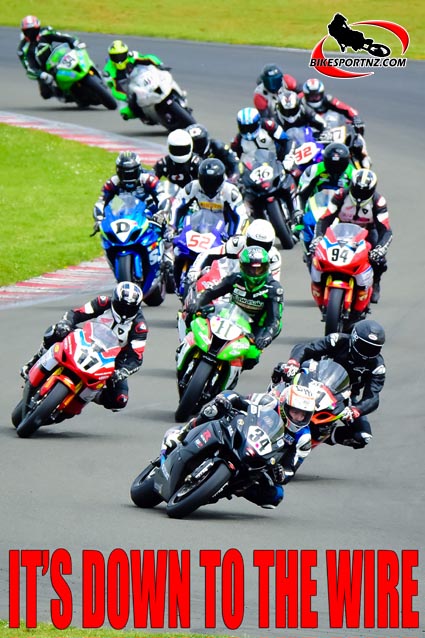 The 2016 edition of the Suzuki Series will go down to the wire on Boxing Day after a scintillating day of racing at Manfeild’s second round on Sunday.

The popular three-round series kicked into life at a sun-baked Bruce McLaren Motorsport Park near Taupo a week ago and carried on, this time under rain clouds, with more cut-and-thrust racing at Manawatu’s Manfeild Circuit Chris Amon, on the outskirts of Feilding, on Sunday.

The action picked up almost exactly where it had left off, with less than a second to separate the leading riders in most of the various bike classes, and Boxing Day’s finale in Whanganui promises more of the same.

There was virtually nothing between the top five Formula One/Superbike riders during qualifying at Manfeild, with Wellington’s defending series champion Sloan Frost topping the scoreboard and gaining one valuable point for the achievement, just as he had when he headed qualifying at Taupo, and the series may yet come down to margins as slim as just one or two points

It was exhilarating action at the front of both F1 races at Manfeild on Sunday with Frost, Liechtenstein visitor and former Suzuki Series winner Horst Saiger, Auckland’s national 600cc champion Daniel Mettam, now racing a 1000cc Suzuki, Whakatane’s Tony Rees and Christchurch’s Alastair Hoogenboezem locked at the front in a thrilling high-speed scrap for every centimetre of tarseal.

When the engines were eventually shut off late on Sunday afternoon, it was Frost who emerged as the new series leader, courtesy of two hard-fought runner-up finishes, with the day’s double race winner, Saiger, rocketing up the standings from third equal to second.

Rees slipped from first to third, albeit just eight points behind Frost and five behind Saiger, with anything still possible at the final round. 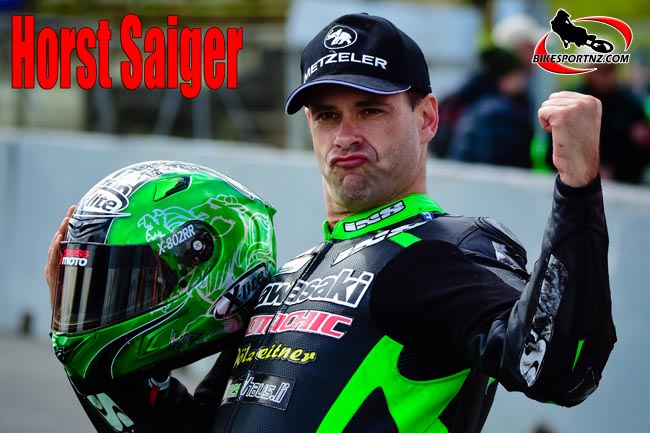 The 20-year-old, appearing at only his second event on the powerful superbike, showed he was a quick learner as he finished a close third in the first F1 race and then led the second race for several laps, following a daring pass that saw his shoot past both Saiger and Frost in the same corner, before eventually being overtaken and forced to again settle for third.

This performance elevated Mettam from eighth to fifth in the F1 class standings.

With the margins between success and failure so tight, Suzuki’s Frost knows he has his work cut out to retain the Suzuki Series crown and also hope that he can prevent Honda’s Rees bouncing back and making it three winning seasons in a row on the streets of Whanganui.

The 49-year-old Rees has won at Whanganui six times now since his first victory there in 1990, but Suzuki has dominated the Suzuki Series wins overall, their riders winning the main trophy on all but two occasions since the series was created in 2008.

Racing a GSX-R1000 supplied by Suzuki New Zealand, Dunlop “had a bit of a play” during practice day on the Saturday at Taupo but was unable to get official clearance from his insurers to race on Sunday, but he made up for that by racing at Manfeild.

He withdrew from the first F1 race with mechanical problems and finished sixth in race two, and, despite his bad luck thus far, he still remains one of the favourites to win on the streets at Whanganui on Boxing Day.

The third and final round of the series is set for the public streets of Whanganui, on the world-famous Cemetery Circuit, on Boxing Day, and it could not be much tighter at the top of the premier class and a white-knuckle spectacle is promised for the thousands of race fans who will no doubt again abandon their Christmas dinners in favour of a few high-octane thrills and spills.

Class leaders after round two of the 2016 Suzuki Series: 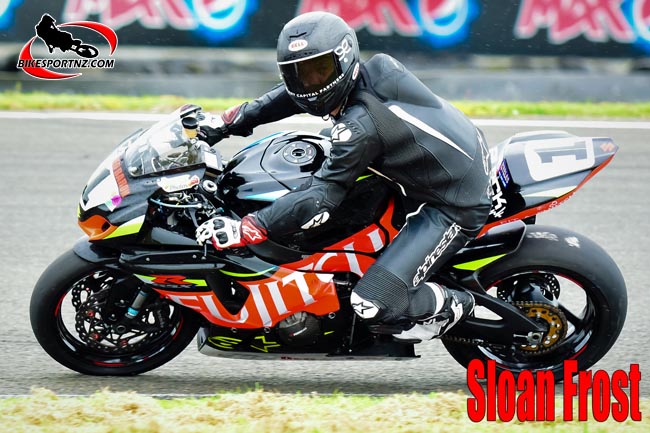