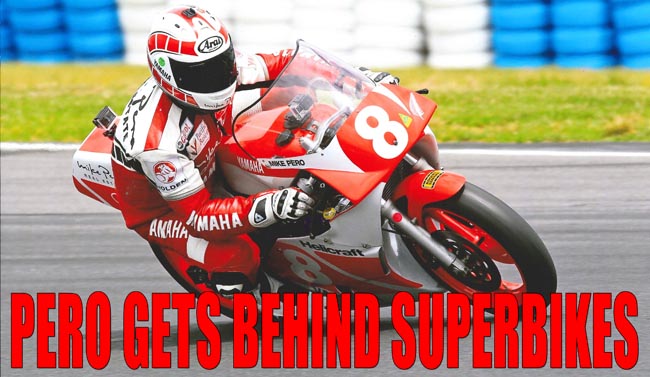 High-profile businessman Mike Pero loves motorcycle sport and he is again putting his money where his passion lies.

Everyone associates the name Mike Pero with real estate but there was a time when Mike Pero was renowned for “gobbling up real estate” on the race track as a motorcycle road racer.

A former top New Zealand motorcycle road racer, Pero returns to his sporting roots by sponsoring the first of four rounds of the 2017 national superbike championships and, when it comes to supporting motorcycle racing, it doesn’t get much more personal than this.

As well as backing the January meeting, which is also the NZ Grand Prix event, he also has plans to get out on the track himself.

Pero was six times a national motorcycle road-racing champion – between the years 1977-82, twice in the 350cc and 500cc racing classes, as well as winning two times in the 410cc production series.

Pero set the New Zealand land speed record for a 350cc motorcycles in 1979. The record of 238 km/h still stands today.

Pero started his working career as a motorcycle mechanic and had six championships and countless GP wins under his belt by the time he was just 23 years of age.

“It’s a great honour to have to be part of the New Zealand Superbikes and Road Race Championships for 2017 and to sponsor the ‘Southern Nationals’ meeting and the New Zealand Grand Prix this season,” said Pero.

“This year’s event will feature all categories from 125cc to Superbikes and sidecars and each of the nine NZ Championship classes will compete for their respective GP trophies.”

During the lunch break on each day of the New Zealand Grand Prix in January, Pero will lead a “Legends Parade” around the track on a Yamaha TZ 250.

Joining him will be other former New Zealand Champions, along with historic race machines from the past. There will also be a demonstration scooter race during the lunch breaks on both days.