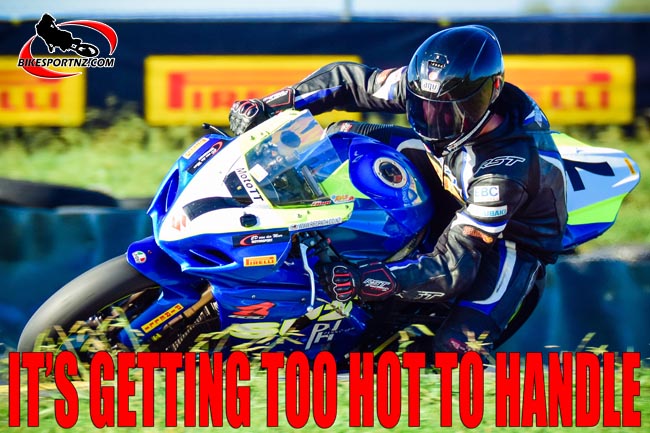 Whanganui’s Allan ‘Flea’ Willacy has a massive problem, although he’s not really complaining too loudly about it.

“I simply don’t know where I’m going to find space for all the entrants?” muttered the Suzuki Series promoter. “I suppose it’s a good problem to have.”

Each year Willacy organises for the public streets of Whanganui to be closed off for a drama-filled 24-hour Christmas-time period as he and his workers run the renowned Cemetery Circuit event, one of the very few motorcycle street race meetings in the world.

This year he has been absolutely swamped with entrants, many of them from overseas, and he really will be stretching the boundaries to fit them all in.

The Cemetery Circuit event on December 26 will again be the third and final round of the popular annual Suzuki Series, which kicks off at Bruce McLaren Motorsport Park near Taupo on December 4, then takes riders to Manfeild for round two on December 11, before its traditional Boxing Day finale on Whanganui’s streets.

The Boxing Day event always draws crowds in their thousands and invariably turns on a spectacle worthy of all the attention.

Frost won the 2015 Suzuki Series ahead of Whakatane’s Tony Rees (Honda), with Liechtenstein rider Horst Saiger (Kawasaki), the early leader in the series, slipping down to eventually settle for third overall.

The year before, in December 2014, it was a classic down-to-the-wire battle between Saiger and another Suzuki-mounted Kiwi, Taupo’s Scotty Moir.

Though at that stage in just his third season of racing superbikes, Moir (pictured above) belied his relative inexperience in the premier grade as he pushed Saiger right to the brink, his most impressive performance coming on the streets of Whanganui on Boxing Day.

Moir finished fourth in the first of two Formula One/Superbike races, just one place behind Saiger, but Moir stepped it up to roar to victory in the next race, while Saiger could manage only fifth.

However, it just wasn’t quite enough for the brave Kiwi to snatch the trophy away and Saiger won the series by just three points from the hard-charging Moir.

In addition to former series winners Frost and Saiger, and runners-up Rees and Moir, Northern Ireland’s Michael Dunlop and fellow UK rider James Flitcroft are also sure to be contenders, not to mention all the other nationally-ranked Kiwis, while British sidecar rider John Holden, a two-time Isle of Man winner who is teaming up with Tauranga’s Robbie Shorter while in New Zealand, will obviously add international sparkle to the sidecar class.

For Northern Irish professional Dunlop, this year’s Isle of Man champion, it will be his first time in New Zealand and he will be one of the main draw card riders for the series.

The 27-year-old Dunlop is the latest in a long line of exciting, headline-grabbing athletes who have been drawn to New Zealand’s tricky Cemetery Circuit in recent years, with Saiger, Britain’s Guy Martin, British women’s champion Maria Costello just a few of the other star attractions that Willacy has managed to entice to New Zealand in recent years.

“But the series’ growing popularity has created a bit of a headache for me this year,” said Willacy.

“The numbers have been going ballistic. It’s a tough position to be in, with this year’s entry list the largest we’ve had in the eight years since the competition began (in 2008). The popularity is global, particularly for the Cemetery Circuit final round, and I guess that means we’ve been doing something right.

“We make it very easy for people to enter and race and the spectators love being so close to the action too.”

Willacy said members of the public could save money by purchasing “early bird tickets” through Ticketek and then they’ll also go in the draw to win a UK110 Suzuki scooter, all decked out in Moto GP colours.