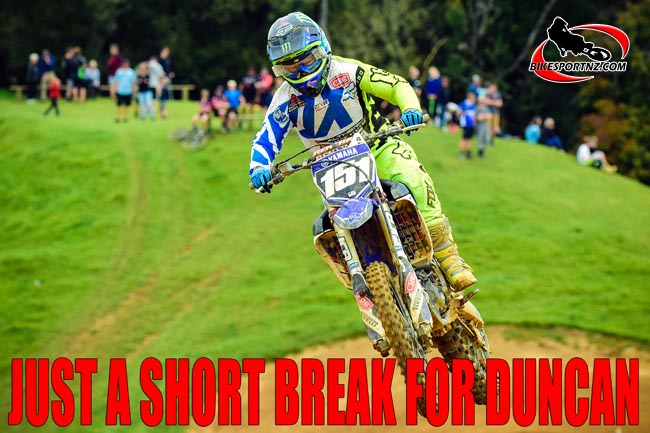 Gasps of horror could be heard from onlookers when Otago’s Courtney Duncan crashed out of the third and final MX2 race of the day at the annual Waikato Motocross Championships last weekend.

But, despite the spectacular tumble and the subsequent medical treatment required, the 20-year-old Women’s Motocross World Championship (WMX) contender confirms her injury will mean nothing more than “a couple of weeks of rest”.

The Altherm JCR Yamaha heroine was in contention to win the day when the accident happened, the event merely a training exercise for her as she builds for another world championship campaign in Europe, starting in March.

She crashed on a tricky downhill at the Te Kuiti track, her bike’s foot-peg tearing into her left thigh, and the race was stopped. Duncan was unable to rejoin the re-started race and instead went to hospital to have stitches inserted into the 8cm wound, leaving Cambridge’s Trent Collins to wrap up the class win overall.

“It all happened so fast that I don’t really know what happened,” Duncan told BikesportNZ.com this week.

“But it’s really only a couple of weeks’ rest and then I’ll be good to go again,” she laughed. “The stitches come out next week.

“It is never fun to have to leave a race meeting early. I’m just lucky to only have a cut to show for it. It’s not even much of a set-back really. I’ll rest and be freshened up to go back to work in no time.

“My pace was good and there are just a few other areas that I need to work on … but I’m keeping those to myself. That’ll be something that me and (Altherm JCR Yamaha Racing Team boss) Josh Coppins will work on over the coming weeks, so that we can make me a more complete and stronger package.

“My deal is all set to race for Yamaha in Europe and they, along with Yamaha in New Zealand, have been very supportive.”

Duncan was cruelly robbed of the world title on her debut in WMX series this year.

Although the “new kid on the block”, Duncan stamped her authority and won five of the 14 races of the 2016 world series, more than any other individual this year and this was even after she had been able to start only nine of the races because of an injury, one that she was not in any way responsible for.

Duncan crashed on a jump while leading at the German GP in May, the third round of the series, after clipping an errant photographer who was standing out on the track. The wrist injury she suffered forced her out of the following five races as she underwent surgery and then took more time off to recover.

Duncan is looking forward to taking on French 2016 world champion Livia Lancelot and new Yamaha signing Kiara Fontanesi, of Italy, among others, when the WMX kicks off in Indonesia on March 5.