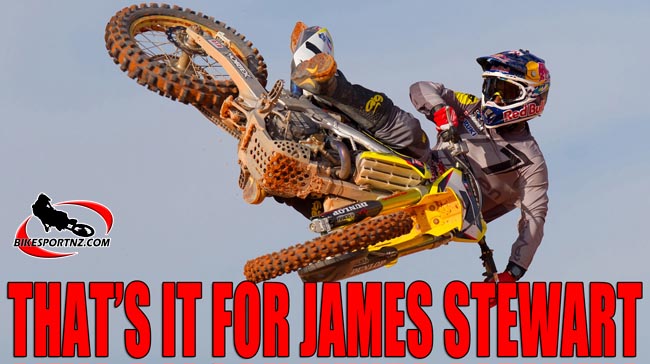 According to team sources, a nagging shoulder injury will keep Yoshimura Suzuki’s James Stewart from competing in final two rounds of the United States Motocross Championships.

Multi-time former US national champion Stewart, who initially injured his shoulder at Hangtown, has competed in just three rounds this season.

“The team decided it was best for Stewart to not attempt competing in the last two rounds,” said Mike Webb, the Yoshimura Suzuki team manager.

“It’s been a disappointing year for James and the team. It just seemed like every time he started to comeback, he’d hit another roadblock. We want to see James get back to full health.”

According to the team, Stewart was hoping to return for the final two rounds after missing Unadilla, but due to the combination of his fitness level and his shoulder injury, he will sit out Budds Creek (this weekend) and Ironman.

The team will race the final two round of the season with Matt Bisceglia. Blake Baggett is out for the season due to a shoulder injury.

“The reality is that motocross is a tough sport and this kind of thing is not uncommon,” Webb continued. “On the positive side we were able to bring in Matt and he’s done an outstanding job as a substitute rider, scoring three-top 10 finishes in his first season racing the 450s. We’re hoping he can continue his strong momentum in the final two events.”