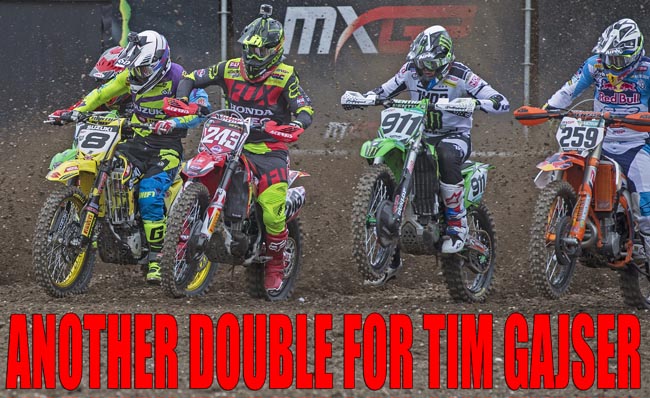 Racing was spectacular at the 11th round of 18 in the FIM Motocross World Championship at Matterley Basin, in the United Kingdom, at the weekend with both the championship leaders, Honda Gariboldi’s Tim Gajser and Red Bull KTM Factory Racing’s Jeffrey Herlings, extending their respective points leads.

New Zealand eyes focussed on the progress of Bay of Plenty’s Ben Townley (pictured above, bike No.8)

On Saturday, Townley rode to ninth position in the qualification heat and was part of a multi-rider scrap going for the top five. Adjusting his suspension set-up on Sunday morning the Kiwi former MX2 world champion took his place in the gate hopeful of a top-10 finish.

The opening 30-minute and two lap chase saw Townley luckless on the first lap. Townley fell and lost a lot of time to restart and re-join the fray. With an empty track ahead he tried to catch the stragglers of the MXGP pack but went down again and was too far adrift so elected to gather energy and resources for the second moto. He made a better second start and was vying for seventh place until a slip on the penultimate lap proved costly and he settled for 12th.

Townley picked-up nine points for his disrupted world championship tally and with a total of 128 now sits 15th in the standings.

“Tough weekend but it doesn’t sound like much different to what I have been saying all year,” said Townley.

“I put it down twice early in the first one so I decided to save my energy for the second. I wanted a decent and consistent moto but fell with a lap to go. It’s been a hard old season.

“I expected a much better weekend. We just need to keep working. We made some positive changes overnight. The team had some ideas and we made a fork and a shock change to make the bike softer and that made it turn better and gain more traction.”

Meanwhile, Slovenian rider Gajser continued to excel with yet another double moto victory, which sealed the deal on his sixth GP win of the season.

Since Monster Energy Yamaha Factory Racing’s Romain Febvre didn’t race on Sunday and will be sitting out next weekend at the MXGP of Lombardia-Italy as well, Gajser now has a commanding lead in the championship.

He 74 points ahead of Febvre who took a massive blow to his title defence this weekend and is now only three points clear of Italian multi-time former world champion Antonio Cairoli.

Back on the topic of Gajser’s raw speed, Rockstar Energy Husqvarna Factory Racing’s Max Nagl is one of the most puzzled. Even his trademark ‘holeshot and head-down’ tactic isn’t working. It’s almost getting to the point where finishing second place to Gajser is as good as a win and that means Nagl had a pretty sweet day in the office since he stood on the second step of the podium.

Team HRC’s Gautier Paulin had one of the nastiest crashes of the season at his home grand prix in France two weeks ago when he was rag dolled off of his bike on a high-speed downhill. Amazingly, he was okay.

In fact, more than okay, it would seem since he bounced back with vengeance on Sunday for third overall, his second podium appearance this season.

Kemea Yamaha MX Official Team’s Valentin Guillod was ridiculously fast in the UK last year in MX2 and was almost equally as impressive in the MXGP class with his great performance for fifth overall, despite crashing in race two. The Swiss rookie ran a hot pace all weekend and is really starting to make progress in the premier class.

Gajser’s insane speed may also be having an effect on the eight-time world champion Red Bull KTM Factory Racing team’s Cairoli, who seems to be riding out of character at the moment and making more mistakes than we are used to seeing from him.

Because of the errors, Cairoli only managed to finish sixth on Sunday, so it’s back to the drawing board for the Sicilian that is running third place in the championship standings.

As for the Brits, Wilvo Virus Performance KTM’s Shaun Simpson is still battling a broken hand. He tried to put on a brave face and even managed to score a couple of points in the first race but was in far too much pain for the second race and didn’t line up, whereas Monster Energy DRT Kawasaki’s Tommy Searle laid low most of the day and for one reason or another only came home in eleventh.

There is just something about this place that Red Bull KTM Factory Racing team’s Herlings doesn’t gel with. He was beaten here fair and square last year, and on Saturday he only finished fifth in qualifying, which is by far his worse qualifying result.

Regardless of the adversity he has faced around this track, he knows what it takes to get the job done and The Bullet used his unprecedented talent to wrap up his tenth double victory of the season to remain unbeaten in grand prix overalls in 2016.

“It’s good, I put myself in a good position with two holeshots” He said, “man! Two holeshots with my weight, I was pumped and I definitely made my life easy for myself by getting them.” Jeffrey now leads the championship by a whopping 148 points, “everything is good, eleven rounds in, seven to go and I have a pretty comfortable points lead” he confidently concluded.

When Monster Energy Kawasaki Racing Team’s Dylan Ferrandis returned from injury a few rounds back, he came out all guns blazing and stole a race win from the otherwise undefeated Herlings.

Since then, Jeffrey seems to have upped his game or has become wiser in his tact. Take nothing away from Ferrandis, the Frenchman rode solidly on Sunday for two second place finishes and second overall. “It was a good weekend but I had two bad starts, so second is ok.” He said, “we are always second to Jeffrey but next weekend I will try again, I will always give my best.”

He got off to a rough start and in his rush to move forward he landed on a crashed rider and went into the fence. After freeing up his bike, he rejoined the race but crashed again and only crossed the line in 24th. With that said, a piece of silverware with third overall today at the MX2 grand prix of Great Britain is a result he was proper pumped with.

Team Suzuki World MX2’s Jeremy Seewer has definitely upped his game this year and it won’t be too long before his results reflect his speed. As an indication of how fast he is, the Swiss rider set the fastest lap of the weekend in MX2 and chalked up his first fastest lap point.

Rockstar Energy Husqvarna Factory Racing’s pair of Brits Max Anstie and Conrad Mewse were both impressive this weekend. Anstie had the fans going mad when he won the qualifier on Saturday, while Mewse had them singing in race one when he pushed the Red Bull KTM stars pretty much all the way to the flag.

Anstie bounced back from his first race shocker to finish fourth in race two, even though he almost de-knackered himself when he cased the quad massively. An eighth in race one, meant the poleman would only finish fifth overall while his teammate and fellow countryman went 5 – 9 for seventh.