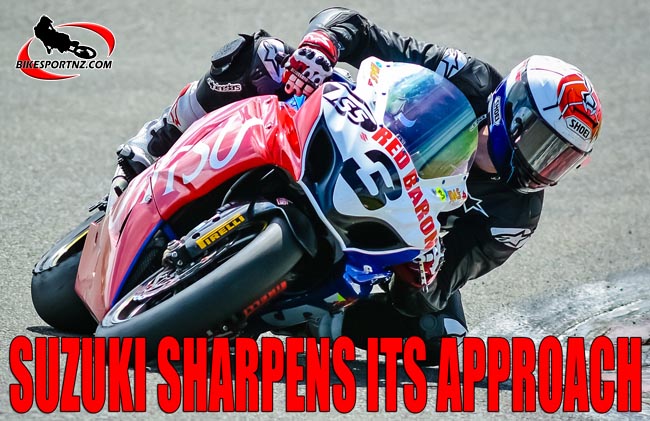 It will be a slicker, sharper and more streamlined Suzuki strike force that takes to the Kiwi race tracks next season, with the wider motorcycling community also set to prosper from the high-profile company’s new direction.

“Most of our rider contracts come up for renewal at this time of the year and that’s the process we’re reviewing,” said Suzuki New Zealand’s GM of motorcycle and ATV marketing, Simon Meade.

He said Suzuki would still have a major presence on the race tracks, with so many riders and teams recognising the strength and effectiveness of the brand, but more focus would now go towards enhancing Suzuki’s magnetism across a wider platform.

“We are withdrawing from widespread direct rider sponsorship, effective immediately, as we look instead to channel our energies towards event-based promotions,” said Meade.

“Apart from sponsoring a small handful of key riders, the plan is to focus our resources on major events such as the Suzuki Tri Series and other events better suited to our marketing requirements.

“Our change of focus gives us a greater ability to introduce more riders to motorcycling and to help create better events for motorcyclists in general.

“From this we feel our riders will be able to attract better sponsors from outside the industry because the events will be better attended and better promoted.

“Suzuki has always been a key event sponsor for a variety of motorcycle and ATV competitions and this support will continue as it is our strong belief that the sport of motorcycling needs well-managed and marketed events for all competitors,” said Meade.

“Over the past 12 months the Suzuki brand has enjoyed some fabulous success, including Wellington’s Sloan Frost (Suzuki GSX-R1000) winning the New Zealand superbike championship, with fellow Suzuki man Andrew Stroud finishing runner-up, along with Glen Eden’s Daniel Mettam (Suzuki GSX-R600) winning the 600 supersports class and then, on the dirt bike side of things, with Taupo’s Brad Groombridge (RM-Z450) winning the national cross-country championships.”

It was actually a Suzuki 1-2-3-4 in the premier superbike class this season, with Christchurch’s John Ross finishing third overall, behind Frost and Stroud, while Taupo’s Scott Moir claimed the No.4 spot.

Frost also won the Suzuki Tri Series that wrapped up on the streets of Whanganui, the famous Cemetery Circuit, on Boxing Day.

“We have already made a firm commitment to the Suzuki Series and the superbike nationals for the 2016-17 season and we will continue to support individual riders such as Frost, Stroud, Auckland’s Aaron Hassan (in the 600cc supersport class) and to our ‘Mister Versatility’, Brad Groombridge, who races in the motocross, cross-country and enduro codes. These men will continue to be our leading ambassadors on the track.”