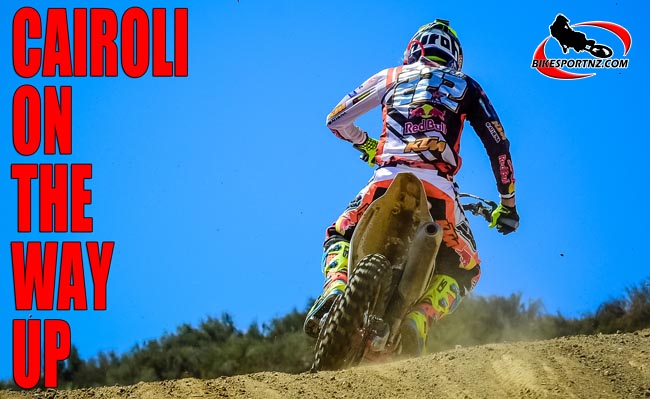 The crowds at Trentino went nuts when home-country hero Antonio Cairoli topped the podium for the second time in a row, winning the day at the eighth round of the Motocross World Championships in Italy.

The Italian multi-time former world motocross champion remains third in the championship standings but he has moved closer to third-ranked defending MXGP champion Romain Febvre – Cairoli now just 21 points behind the French rider – while 2015 MX2 world champion Tim Gajser stays on top, although the Slovenian is just four points ahead of Febvre.

New Zealand’s Ben Townley finished seventh and 15th in the two MXGP races, good for tenth overall on the day, and he remains 13th in the championship standings.

“The first moto was pretty decent; I had an average start and got up into seventh, sixth at one point, but then Gajser passed,” said Townley afterwards.

“I struggled a little bit to be honest and wasn’t very happy with my riding. In the second one the start was pretty much the same and was pretty much eighth the whole race. I was riding better but then on the last lap crashed while Nagl was putting pressure on. I rushed into a turn and into the back of Gautier and tipped over. I made a mistake and paid for it.

“It was another average weekend in my opinion and I need to keep working and get better on Saturdays as this part has been a big Achilles heel for me. Starts as well. We’ll do some work before Spain and see what we can get out of it.”

In the MX2 class, Dutchman Jeffrey Herlings was humbled by defeat in race one at Trentino, but he bounced back in race two with a massive win for his 55th GP victory and he continues to lead the title chase.

Eight rounds of hard-core motocross are in the bag and so far the first half of the season has provided no clues for the second half.

The speed of the MXGP class is an ever-rising constant, especially with the likes of Gajser raising the bar, and the likes of Cairoli returning to form. These elements may be contributing to the mistakes Monster Energy Yamaha Factory Racing’s Febvre is making at the moment as he tries to defend his MXGP crown.

Adding to the sight and spectacle of the MXGP championship, Febvre crashed on turn one in the first race and had to battle from last. He crashed again on his mission to get to the front and only finished sixth.

In race two, the Frenchman bounced back. He didn’t get the greatest of starts but charged hard and capitalised on a mistake of the race leader, Cairoli, to win the final race of the day. Although he wishes the day could have been better, he said, “I’m happy to be on the podium in second place.”

Honda Gariboldi’s Gajser treated his Slovenian fans that came out to support him with his mind-blowing speed and intensity. All you can do when you watch the 19-year-old rookie ride is shake off the goosebumps and just admire his talent. This weekend Gajser had two massive crashes, one in each race.  Amazingly he bounced back from both and still managed to land on the podium with two fourth place finishes.

Gajser is the only rider in MXGP to have finished on the podium at every round.

Strijbos was looking particularly good and was only nudged off the podium on the last lap of the final moto when Gajser passed another rider for one more point. As for Nagl, it wasn’t quite the same experience of last year when won the Grand Prix, although he was very impressive in race one when he chased Cairoli and finished second. In race two, the German got himself into a bit of strife on the opening lap and only got back to eighth.

It’s no secret that Red Bull KTM Factory Racing’s Jeffrey Herlings gets a kick out of breaking records, so even though he won the GP at Trentino, his eighth consecutive, his hope of winning every single race this season came to a halt when Dylan Ferrandis came out swinging for the win in race one.

“Unfortunately I can’t be undefeated anymore,” Herlings said, “but I won the GP and that’s what matters so I will try to win all of them.” He returned to his winning ways in race two with one of his patented + 30 second leads.

There has been a bull let loose in a china shop! Monster Energy Kawasaki Racing Team’s Ferrandis shattered Herlings’ hopes of remaining unbeaten in every race this season when he won the first MX2 race.

The talented Frenchman has sat out half of this season after he dislocated his shoulder in Thailand. He didn’t crash in that instant, he had an on-going problem with that shoulder that had flared up. He opted at that moment to go back to France where he had his shoulder reconstructed. “Most people can’t believe I am riding already after my injury, normally it takes much longer to be better,” he said during the press conference in Germany. You would never have guessed that he had two months of the bike if you saw the speed and intensity he rode with this weekend which saw him dominate in the qualifying race on Saturday and win race one on Sunday after bashing bars all race long with a desperate Herlings.

Red Bull KTM Factory Racing’s Pauls Jonass shelved his acrobatic tricks this weekend and wound up on the podium for the third time this season. In case you didn’t know, the Latvian has been riding incredibly quick this year but has struggled to keep his KTM rubber-side down.

This weekend he had his first steady day with minimal errors since the MXGP of Europe, which took place in Valkenswaard, The Netherlands, back in March.

“I didn’t go out in warm-up this morning because I wasn’t feeling well” he said, “I wasn’t even sure I was going to race but I did and I am really happy to be on the podium on a track like this, it’s not my favourite but it was okay today.”

TM Racing Factory Team’s Samuele Bernardini had the chainless chainsaws going full gas on the fence lines as he ran up front in both races. The Italian has become ‘the cat among the pigeons’ as he tends to be an excellent starter and can foot it up front for the first half of the race. He is also difficult to pass, which upsets the pigeons that are battling for those top five places in the championship.

While Bernardini does fade during the races, he clearly has the speed and skill to be something great as this weekend he set the fastest lap in MX2.

Suzuki World MX2’s Jeremy Seewer has had a lot of ‘Lovely Days’, as his butt patch reads, but unfortunately Sunday wasn’t one of them. The Swiss rider broke his podium run when he finished fourth in race one after a shabby start and then binned it in race two and only recovered for twelfth. Those two results left him in fifth overall for the MX2 round of Trentino.