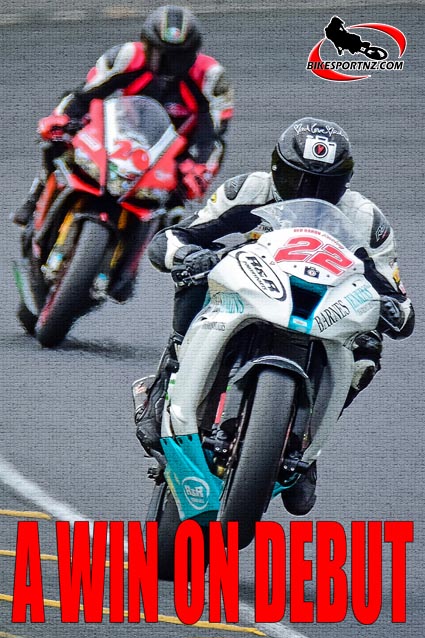 The champagne corks were popping for Kawasaki rider Toby Summers as the 2016 New Zealand Superbike Championships wrapped at Hampton Downs at the weekend.

The Manukau plumber secured the 1000cc superstock trophy at the fourth and final round of the series on Sunday, a brilliant way to wind up his debut season on a 1000cc machine.

Formerly a front-runner in the 600cc class and a two-time former winner of the F2 class in the stand-alone Suzuki Tri Series, Summers stepped up to campaign the bigger Kawasaki ZX10-R bike this season, in the class reserved for stock-standard bikes, raced on the track at the same time as the fully-modified superbikes but scored separately.

“This was just a warm-up season for me. It was all about me getting to grips with riding a superbike, which is a lot more challenging than riding a 600cc bike,” said Summers, a 43-year-old father-of-two.

“It was my first time of trying the Kawasaki ZX10-R, racing in what was is really a resurrected class from the past, but I won it with a race to spare.

“I got shot off the track during one of the races down in the South Island and had a problem with my tyre pressure in one race at Hampton Downs, but, apart from that, I won every other race. Even with the tyre issue at Hampton Downs, I still managed to finish second. I came here with a 24-point lead, so it wasn’t really a worry.”

With a best lap time at the weekend of one minute 5.007 seconds, Summers was the 11th fastest out of 133 riders at the track, although it is fair to point out that his closest 1000cc superstock rival, Telford, was eighth fastest, putting in a time of one minute 4.767 seconds.

Only 18 riders of the 133 went under one minute six seconds.