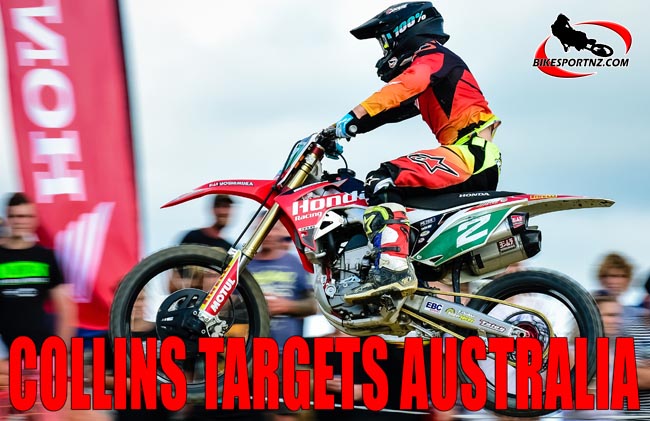 New Zealand’s Trent Collins may have a huge future ahead of him, especially if his dynamic performance in Woodville at the weekend is anything to judge by.

The 15-year-old from Ohaupo, just south of Hamilton, was outstanding in the junior race action at the weekend’s 55th annual Honda New Zealand Motocross Grand Prix at Woodville and he raced among the seniors on Sunday too.

All of which should indicate that the Honda Racing Team rider will be worth respecting when his lands in Australia to become one of “Hogan’s Heroes” in the coming weeks.

Collins, a year 11 pupil at Cambridge High School, scored a hat-trick of wins in the junior 14-16 years’ 250cc class on Saturday, finishing the day a solid 11 points clear of his nearest threat, Nelson’s Reece Walker (Yamaha).

Collins then underlined that unbeaten performance by also winning the joint 125cc-250cc Champion of Champions feature race as well, this time taking the chequered flag ahead of Taupo’s Wyatt Chase (Yamaha).

“The first race was a start-to-finish win, but the next one was a bit more difficult. I led that race up until three laps to go when I crashed. I came up short in a rut and the front end of the bike tucked under.

“I recovered myself pretty quickly though and was soon back on the tail of the rider who passed me, Reece Walker. I retook the lead with one lap to go.

“It has been a good summer for me … I won my class on both days at the annual Honda Summercross (just after Christmas), and I won the Auckland Champs and the Waikato Champs. I’m feeling pretty strong at the moment.”

But more was to come on day two at Woodville.

On Sunday, Collins then raced in the talent-laden senior MX2 (250cc) class, joining a full starting grid of 40 elite riders, many of whom were current or former Kiwi internationals.

Collins now prepares himself racing in the MX2 class at first round of four in this season’s New Zealand Motocross Championship in Timaru this coming weekend, before he heads off-shore to race in Australia.

“I will be racing for the BCP Honda team that’s based in Melbourne and run by (former Australian champion) Lee Hogan.

“I will race the junior 250cc class in the Victorian State Motocross Championships … although I will miss the first round of that series because it’s the same weekend as the second round of the New Zealand nationals. I will be there for the next three rounds in Australia and then race a couple of New South Wales state rounds as well.”

To wrap up this Australian adventure, Collins will then line up at the Australian Junior Motocross Championships at the end of the year.