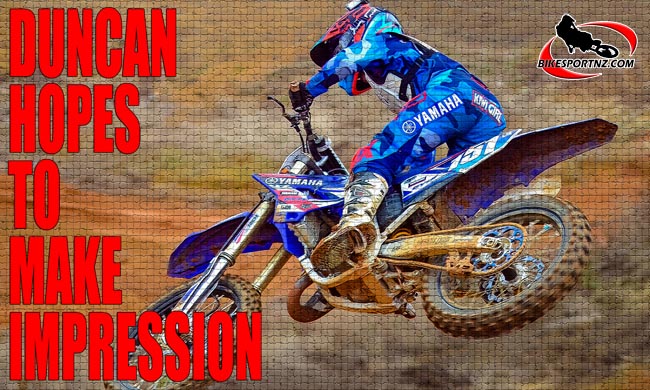 It is a long way from New Zealand to the motocross hotbed of central Europe, but that’s the journey on which South Island teenager Courtney Duncan hopes she is about to begin.

It probably comes as no surprise to those who know of the Yamaha rider’s exploits and to travel from the small Otago town of Palmerston to the hustle and bustle of racing the Motocross World Championships in places such as Belgium, Germany and France has always been the aim for the Kiwi Yamaha rider.

The 19-year-old Duncan heads to Qatar in a few weeks’ time to tackle the opening round of the Women’s World Motocross Championships – that event sharing the programme with the start of the parallel but separate men’s competition – on February 27.

If she impresses at that event, she’s hoping it will lead to a full campaign with the six-round women’s series continuing in The Netherlands (March 28), Germany (May 8), France (June 5) and Switzerland (August 7) and wrapping up at Assen, in The Netherland again, on August 28.

She has beaten most of the motocross boys in New Zealand and has turned heads each time she’s raced overseas, whether it be winning in Australia or the United States, and it was just a matter of time before she hit the world stage, although she will still have to prove herself.

She has the backing of New Zealand’s two-time former world No.2 Josh Coppins, of Motueka, the head of the Altherm JCR Yamaha Racing Team and has been training regularly with him as she builds towards her world campaign.

For most of last year she was in recovery mode, regaining her strength after tearing her ACL ligament in her left knee – in a freak basketball accident, totally unrelated to motocross.

“I knew straight away what had happened. I was just passing a basketball around before I was to go into the gym and something felt funny.

“It had happened before, so I knew what it was,” said Duncan.

She was flown to Auckland for surgery on her knee and then began the long process of rehabilitation.

“I did my exercises pretty much every day. Had the weekend off, but every day it was just about getting fit again.”

She got back on the bike in late October.

“I thought I would be a bit nervous getting back on the bike, but it just felt like home.”

She is now back to full fitness and her coach and mentor, Coppins, is quietly confident that she will impress in Qatar and says “she needs to”.

“Courtney is only officially confirmed for Qatar at this stage,” he said. “It’s quite an expensive undertaking to do a full campaign and she’s not got a factory ride. She needs to show what she’s made of at Qatar and we can go on from there.

“We in New Zealand know how good she is, but you’re only as good as your last ride and nobody has seen her overseas for a while. Her biggest competitor is herself. Keeping the bike on two wheels is very important.

“The idea last year was for her to do two rounds and build from that, but then she injured herself and had a lengthy lay-off.

“I don’t know what she’ll make of Qatar. I raced there myself in 2002 and finished second to (Belgian former world champion) Joel Smets. It was among the sand dunes and Joel was on a 450 four-stroke and I was on a 250cc two-stroke, but the track is all man-made now and a lot of it is clay-based, so it’s totally different really.

“Unfortunately, the Qatar race clashes with the date for round two of the New Zealand Motocross Championships and I can’t be in two places, but I will be following her progress as closely as I can.”

Duncan’s Yamaha YZ250F bike is currently being prepared for her in Belgium.

“Yamaha New Zealand has really stepped up to make this possible,” said Coppins. “They can see the potential in Courtney and they are helping to bridge the gap.”

Fellow Yamaha rider, 21-year-old Italian Kiara Fontanesi, was the 2015 women’s world champion and she will no doubt be the one to beat again in 2016, unless a Kiwi girl called Courtney Duncan can upset the form book.