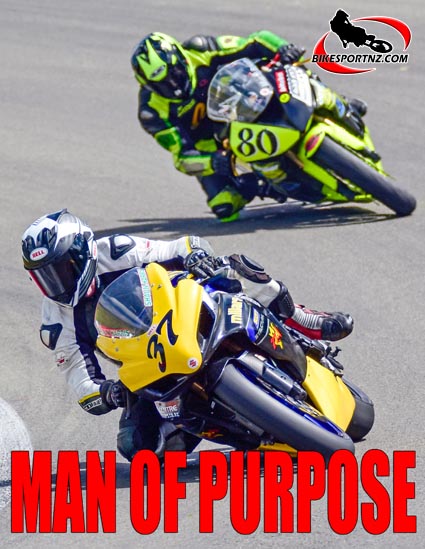 It didn’t take Taranaki’s Shaun Harris long to get his mojo back.

A near-death experience just over eight years ago, when Harris crashed spectacularly at the infamous Isle of Man public road races in 2007, has not dimmed his passion for the sport.

And the New Plymouth man has now made a spectacular comeback to the ultimate level of racing in New Zealand, winning the day in his class at the opening round of the superbike nationals in the South Island at the weekend.

Lying in a hospital bed, nearly every bone in his body a shattered mess, Harris never thought he’d be able to race again. But the just-turned 52-year-old three-time former Isle of Man winner is out burning up the track again.

He now heads to the second of four rounds of the 2016 New Zealand Superbike Championships at Teretonga, on the outskirts of Invercargill, this weekend in a confident mood.

Harris (Suzuki GSX-R450) finished a remarkable runner-up in his first of three superlites class races at round one of the series at Mike Pero Motorsport Park, Ruapuna, last weekend, crossing the line behind Christchurch young rising star of the sport Matthew Hoogenboezem (Suzuki GSX-R450).

But that was just the beginning and, with Hoogenboezem crashing out, Harris convincingly won the next two races outright to earn himself a solid 21-point series lead over Nelson’s Jonny Lewis (Yamaha R450) as the riders head to Teretonga for another showdown.

With Auckland’s Gavin Veltmeyer (Suzuki GSX-R450) just another three points further back and Hamilton’s Jacob Stroud (Yamaha R6 450) only three points behind him, the action in this class is sure to be red hot this weekend.

“I’m confident in that I know what I can still do,” said Harris. “I built the bike myself, using my 650cc bike, modified to eliminate one cylinder and make it a 450cc bike, and I only rode it for the first time like that on Thursday before Ruapuna.

“My laps times early on in practice showed I might be able to expect a top three result and that’s all I wanted really, to get on the podium. Then I qualified third fastest and that was okay because I generally go faster in the races proper.

“My reaction with the throttle has always been good and I got a good start each time. I was actually leading the first race on Saturday when Matthew (Hoogenboezem) snuck around the outside of me on the last lap. I could have done a balls-out move to take it back off him, but I did the sensible thing and followed him across the line. I was beaten fair and square.

“It’s a shame Matthew was involved in a collision the next day because he’s very talented and has a great future.

“Another young star in the making, Jacob Stroud, took it to me in race two (on Sunday), but I managed to hold him off and take my first win in the NZ Championships since 2003.

“Jacob Stroud was only 100th of a second off the lap record for Ruapuna. What a star, I say, and he is only 17 years old.

“I simply smoked ’em in race three and that was doubly important because it signified the NZ GP title win as well. But I was in quite a bit of pain after that race and went for the painkillers straight away.

“But I’m loving being able to ride again. It’s making me fitter and stronger.”

Harris will be hoping he can produce similar form at Teretonga this coming weekend.

Following racing at Teretonga on Sunday, the riders head to round three at Levels Raceway, near Timaru, the following weekend (January 24), before it all wraps up at Hampton Downs, near Meremere, on March 6.