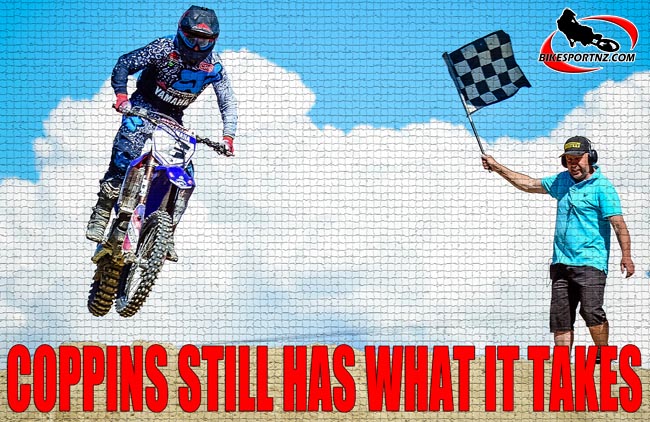 Motueka’s Josh Coppins brought all his Motocross World Championship Grand Prix experience into play when he won the premier races at the 30th annual MX Fest at Taupo over the Labour Weekend.

The 38-year-old former world No.2, now retired and working as the manager of the Altherm JCR Yamaha Racing Team, gave himself an assignment to ride the team’s MX1 class Yamaha YZ450F bike at the Huka Honda-sponsored weekend, his MX1 class rider from Australia not actually due in the country until January, and he proved that he was still up to the task.

It was an absolutely massive day for Yamaha at the Taupo MX Fest with Coppins going 1-1-1 for the overall in the MX1 class on Sunday and, despite being required to race his YZ250 two-stroke in the MX1 class, Waitakere’s Ethan Martens finished runner up in the MX1 class, ahead of former MX Fest overall champion Brad Groombridge (Suzuki RM-Z450), of Taupo.

Chase’s younger brother, Wyatt Chase, won the 125cc class on board his YZ125 and Whakatane’s Darren Capill (Yamaha YZ450F) won the veterans’ class, as well as winning the MX3 class.

Coppins finished an unaccustomed third in the first of five shoot-out races and then powered on to win the next three races and ensure he was favourite to win the three-rider final showdown. He won that comfortably and took the major honours for the weekend.

“It was a great weekend for the team,” said Coppins.

“We have Dean Ferris coming over from Australia in January to ride our MX1 bike, but, in the meantime, I think I did an okay job filling in,” said a modest Coppins.

“It seems I can do an okay job and fly the flag. knew I had to be well prepared to compete here this weekend and I think I obviously put in enough work

“I didn’t ride great. My arms are tired and I my body position on the bike was not perfect, but I got the job done.

“As a team we will now tackle the Auckland Motocross Championships in December and ride at the Whakatane Summercross (just after Christmas), with me on the MX1 bike, the Yamaha YZ450F, but Dean (Ferris) will take over that role at the New Zealand Motocross Grand Prix at Woodville (in late January).

“I suppose, by me racing today, I showed my riders that I wouldn’t ask them to do anything I wouldn’t do myself. I think they will respect me for that.

“Kayne (Lamont) showed improvement in nine days at the Altherm JCR Yamaha Racing Team headquarters recently that would take most riders weeks to achieve. That’s very positive and the season ahead looks good for us.”