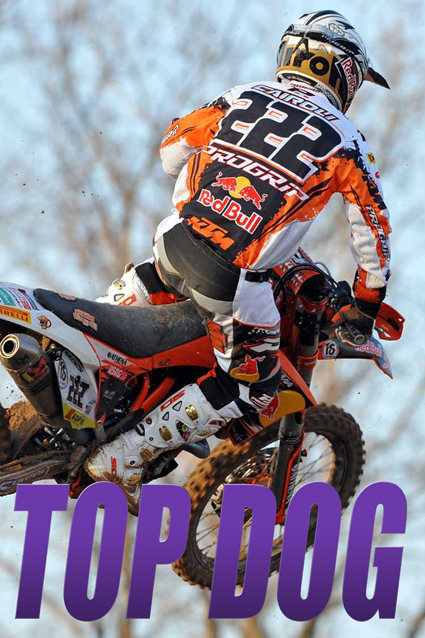 In sharp contrast to the vicious sand of Valkenswaard where the last round of MXGP took place, MXGP of Spain in Talavera de la Reina presented a much harder surface, more elevation and warmer temperatures for round six of the FIM Motocross World Championship.

In what was yet another dramatic and action packed round of racing, egged on by a rambunctious crowd, Red Bull KTM Factory Racing’s Antonio Cairoli took his first MXGP overall victory of the season.

Meanwhile in MX2, Standing Construct Yamaha Yamalube’s Valentin Guillod put in a superb and gripping performance to land on the top of the box for the first time in his MX2 racing career.

It was a well overdue MXGP round victory for Cairoli and an emotional one at that.

The last time the Italian eight-times FIM Motocross World Champion won a grand prix was back in August last year at the MXGP of Belgium. This victory marked the seventy-third overall win of his career and is one that he dedicates to his father, the late Benedetto Cairoli.

“My father was here last year and after that I didn’t see him anymore so I dedicate this win to him,” Cairoli said.

Red Bull IceOne Husqvarna Factory Racing’s Max Nagl added one more ‘holeshot and race win’ statistic to the books with his performance in race one where he blitzed everyone after taking his sixth holeshot of the season.

Nagl said after coming home third in race two for second overall, “I messed up my start when I did a little wheelie, so that wasn’t so good and then after that I was struggling to find the good lines so I just rode smart, but I happy with the day.”

It was always just a matter of time for Yamaha Factory Racing Yamalube’s Romain Febvre, who has been beyond impressive in his rookie year, to finish on the podium. Now just six rounds in, the Frenchman was able to uncork his first bottle of bubbles.

“It was such an amazing feeling for me, it was a little bit the same as last year when I won my first MX2 grand prix. It is such a good feeling,” Febvre said.

A gnarly crash in race two put a damper on Rockstar Energy Suzuki World MXGP’s Clement Desalle and an end to his podium streak. Despite the craziness of his crash, the Belgian managed to salvage fifth in that race and combined with his second place in race two finished fourth overall.

It wasn’t the easiest day in the office for Team HRC’s Evgeny Bobryshev who had to come from behind in both races. Nevertheless, “Russian Bob” is not a quitter and he made that evident with his solid fight forwards in both races for fourth and fifth place results which landed him in fifth overall here at MXGP of Spain in Talavera de la Reina.

Similar to his teammate, Team HRC’s Gautier Paulin also had two bad starts. In race one GP21 managed to finish fifth while his most impressive performance was in race two after he went down in the first corner and managed to go from last to seventh.

As for the Spaniard’s, Marchetti Racing Team KTM’s MXGP rider José Butron managed to wrap up his home round in 14th.

The super stylish Swiss already snatched up a ton of attention for the epicness of his scrubs, but what really got people talking was his flat-out speed. Without losing his fun and playful style, the Swiss rider put in the ride of his life to win the second race for his first ever MX2 grand prix victory.

The two-times FIM MX2 World Champion demonstrated maturity beyond his years in the first race as he held his composure despite the pressure he received from Monster Energy DRT Kawasaki’s Max Anstie which saw him take the victory.

But, what was most extraordinary was his performance in race two after he had a very ugly crash which left his bars bent out of shape.

Nevertheless, Herlings, the rider they call “The Bullet”, soldiered on and managed to charge from 21st back to seventh for second overall.

After sitting on the heels of Herlings for the entire duration of MX2 race one, it looked to be the turn in results that Anstie was looking for. Although he put in an amazing performance in that particular moto, the Brit made his life extremely difficult when he started well outside of the top ten. After charging forward on an extremely challenging circuit, Anstie managed to wrap up eighth which left him walking away from the grand prix of Spain with fourth overall.

Rounding out the top five, Honda Gariboldi’s Tim Gajser rebound from his average result in race one which came about because of a crash to finish second in race two for fifth while his team-mate, Honda Gariboldi’s Jorge Zaragoza, finished 20th on his MX2 debut.

RESULT FROM THE SPANISH GP: