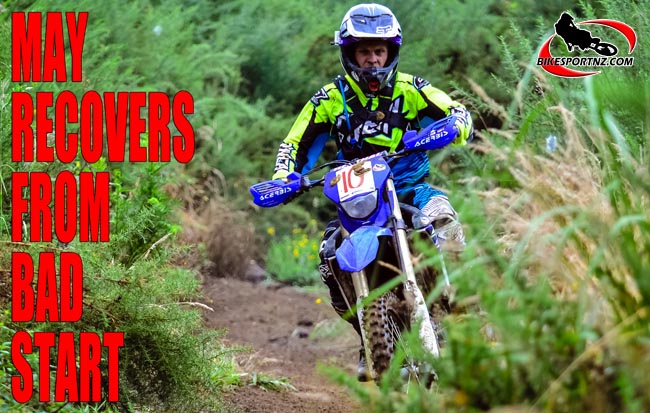 New Zealand’s Callan May continues to make advances in the United States.

Racing in the high-profile Grand National Cross-country Championships, the 22-year-old Yamaha rider from Titirangi, in Auckland, in just his second season of GNCC racing, tackled the fourth round of 13 in the series at Big Buck Creek in South Carolina on Sunday and came away with his best result of the season thus far.

The BikesportNZ.com Yamaha rider finished a hard-fought 14th overall and seventh in class on Sunday.

Racing in the XC2 (250cc) class of the championship, May has now taken his Yamaha YZ250F to finish among the leading riders in three of the four rounds thus far.

He was unlucky to finish 37th overall and 18th in the XC2 class, after mechanical problems, at the series opener in Florida in March, and this means he has been forced to play catch-up on the scoreboard, but the resolute Kiwi is now up to ninth overall in the battle-within-a-battle for XC2 class honours.

“Being based in South Carolina, the Big Buck GNCC race was the closest race for me,” said May.

“The shortest drive in the series being only an hour long was very nice. We arrived at the track on the Saturday with temperatures around 30 degrees it was definitely going to be the hottest race so far this year.

“The start is a crucial part to GNCC racing, with more than 30 riders lining up in XC2, it was a stacked class for the day.

“The flagged dropped, but, as I hit the electric start on my Yamaha YZ250FX, I hit the gas too early causing it to flame out. I was last off the line and last into the woods.

“Big Buck is known to be one of the faster tracks on the circuit so battling through the dust was hard work on the first lap. I came in 12th the first time through the scoring zone, so I was making progress after my terrible start.

“I was battling with fellow Yamaha rider Austin Lee for the entire race. At the halfway point I pitted and was in 10th position. A fresh set of goggles, some Carbsport to fuel my body and I was ready to hammer out the last three laps. I passed a few riders and, going into the last lap, I had the advantage over Austin going into the woods in front.

“A run-in with a lapper gave him the chance to get in front of me but I was un able to pass him back. I finished the day 7th in XC2 and 14th overall, my best overall finish to date in the States, so I’m happy about that and it’s something to build on.

“With a weekend break now, we then head straight on to round five in Indiana, the Limestone 100. I’m looking forward to that.”

May is improving every time he races – he has so far registered 18th, 9th, 9th and 7th placings in the XC2 class in the four rounds thus far.