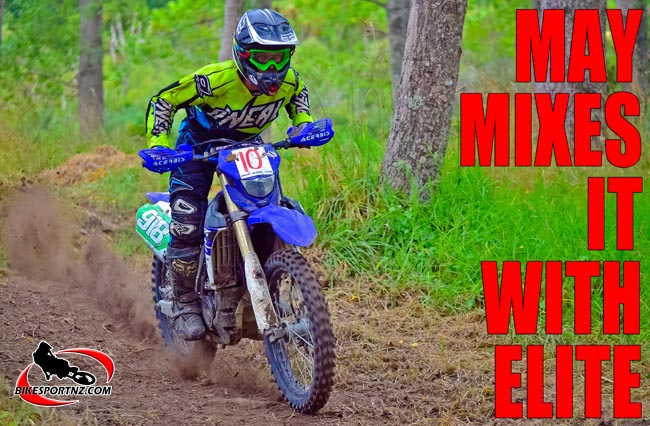 New Zealand’s Callan May encountered a few unexpected obstacles at the latest round of the Grand National Cross-country Championships (GNCC) in the United States at the weekend, but still he managed to come away with an impressive result.

The 22-year-old Yamaha rider from Titirangi, in Auckland, in just his second season of GNCC racing, tackled the third round of 13 in the GNCC series at Steele Creek, in Morganton, North Carolina, on Sunday with high hopes he’d be able to build upon his solid work from the previous two events.

And he achieved this with a hard-fought 19th overall and ninth in class on Sunday.

Racing in the XC2 (250cc) class of the championship, May has now taken his Yamaha YZ250F to finish among the leading riders in two of the three rounds thus far, although his 37th overall and 18th in class, after mechanical problems at the series opener in Florida in March, meant he has been forced to play catch-up on the scoreboard.

“Track conditions were perfect for the weekend, with only a few little muddy spots and minimal dust,” May reported. “I was going to sleep at the track, as I normally do, in my van but the temperature was getting down to minus three overnight, so it would have been too cold for that.

“Luckily I had been staying at Australian rider Josh Strang’s base the week before, so I stayed on at his place and I didn’t freeze.

“I got a good start in the race, heading into the woods in about sixth position.

“A few miles went by and I was ready to make a pass on the rider in front on an alternate line but, as I was slowing down, a racer behind ran up the back of me causing us to crash. We both remounted and carried on, after losing a few positions in the process.

“A couple miles later, my luck got even worse and a vine overhanging the track wrapped around my neck, slicing into my neck and ripping me off my bike.

“Winded and slightly in shock, I got back up and carried on. I came around on the first lap in 13th and managed to work my way up to ninth by the end of the race.

“It’s been two days since the race and my neck is healing but still very sore. A few rest days to heal is needed and hopefully I’ll be good to go by the weekend (and also for the next round of the series at Big Buck, in South Carolina, on April 12).”

After yet another top-10 result in the class, the young Kiwi has pushed into the top 10 for the championship and he is now sitting eighth in the XC2 class standings.