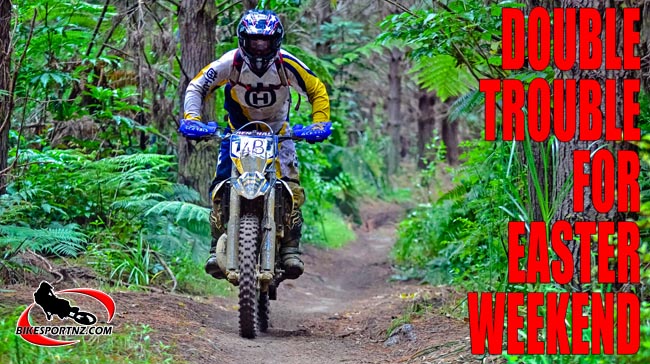 New Zealand is home to some of the world’s best off-road motorcycle racers and, in the enduro branch of the sport, there is one man who stands head and shoulders above all the rest.

It is now three impressive wins from three starts for Auckland’s Chris Birch in this season’s New Zealand Enduro Championships and, in just a couple of days’ time, he could possibly make that five from five.

The 34-year-old Kiwi dirt bike international and defending national champion won the opening round of seven in this year’s KTM-sponsored national enduro series in the Riverhead Forest, west of Auckland, in February, and then he repeated the dose at round two near Whangamata just a couple of weeks later.

Glen Eden’s Birch then made it three in a row when he took his KTM 350 XC-F bike to win the third round near Wellington midway through last month, finishing the day on the steep forest course near Porirua just ahead of Wellington’s Jake Whitaker (Husqvarna), Howick’s Liam Draper (Husqvarna, pictured above), North Shore’s Chris Power (Yamaha) and Whangamata’s Jason Davis (KTM).

With rounds four and five set to follow in quick succession this weekend – round four near Christchurch on Saturday and round five near Mosgiel on Easter Monday – it will be the perfect time for Birch’s rivals to strike back, before their title hopes dry up completely.

None of Birch’s rivals could be described as “Easter bunnies”, every one of them international-calibre contestants and many with national class titles to their names already, but Birch is really something special.

He has already won seven New Zealand Enduro Championships outright and it’s quickly looking as if No.8 will be tucked away before too much longer, that is unless another rider manages to snap his win streak.

Whitaker, riding a Husqvarna FE250, came close to doing that at round three when he crossed the finish line just 75 seconds behind Birch after a brutal day of racing in the Akatarawa Forest, up the Moonshine Valley Road, with Draper again producing a surprise performance to take his tiny 125cc Husqvarna TE125 to finish third overall.

“It was quite tough in places today, but I like it when it’s like that,” said Birch. “The series has definitely been going well for me and so I have no complaints. It’s a shame other dirt bike series have date clashes with this one because there should be more competition for me here than there is.

“But I still have to ride very well to beat these guys.”

It was Whitaker’s best result of the series thus far.

“I may have had a slight home turf advantage, but I was still surprised to find myself close behind Birch on the results sheet. I’m pleased with how I did at Wellington,” said Whitaker.

Following racing in the South Island this coming weekend, the series continues with round six is at Waimiha on Saturday, May 9, and then wraps up at the seventh and final round near Tokoroa on Sunday, May 10.