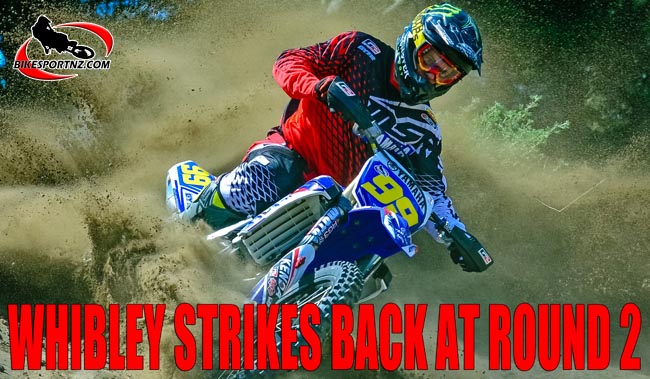 Pahiatua’s Paul Whibley struck back at his team-mate with a vengeance on Sunday.

The 36-year-old Kiwi international returned to settle back in New Zealand after a successful 12-year stint of racing motorcycles off-road in Europe and the United States and he immediately went to work try to re-established his position at the top of the sport in New Zealand.

The first round of four in this season’s New Zealand Cross-country Championships, near Onga Onga, in Central Hawke’s Bay, last month did not go quite to plan for the Yamaha rider and he had to settle for overall runner-up that day, finishing behind his team-mate, defending and four-time former national champion Adrian Smith, from Mokau.

But the day belonged to Whibley at round two near Mosgiel on Sunday.

Whibley (Yamaha YZ450F) and Smith (Yamaha YZ250FX) were never far apart throughout the three-hour senior race until, with just over a lap to go, Smith crashed.

With the throttle pinned wide open, Smith launched his bike into a swampy bog, the bike stuck and he was thrown over the handlebars.

He was not injured but the time he lost recovering himself and his bike was about all that came between the pair at the finish, with Whibley eventually taking the chequered flag by just over two minutes from Smith.

“It was another very fast course,” said Whibley. “There were some interesting pieces up gullies, but in other places it was just flat out. Fifth gear on my bike got a good work-out that’s for sure.

“Adrian and I were nose-to-tail right through the race, but I wasn’t looking behind me too much at these speeds and so I didn’t realise he’d crashed out near the end, until I had a chance to glimpse behind me in a hairpin corner and then saw he wasn’t there anymore.”

Smith was philosophical about the outcome.

“I had led until the last two laps but maybe I pushed a bit too hard. My last lap was completed with bent handlebars.

“It was a pity really. I think I’d have had the advantage on the final lap, because I’d taken on fuel a lap earlier and Paul hadn’t. He’d have had to stop to refuel and I’d then have a gap on him.”

The reversal of fortunes for Whibley and Smith means the two men now head to round three near Nelson (on April 19) level on points and, with only three of the four rounds to be counted and riders discarding their worst result, it means the championship chase will go down to the wire at the final round near Pahiatua on May 17.

The 90-minute junior race earlier in the day saw round one winner Reece Lister (KTM 125), from Kotemaori, again triumphant.

Unless somebody can upset Lister at round three, he could possibly wrap up the junior title with a round to spare.

Both senior winners Whibley and Smith are supported by Yamaha-Motor New Zealand, BikesportNZ.com and Workshop Graphics.