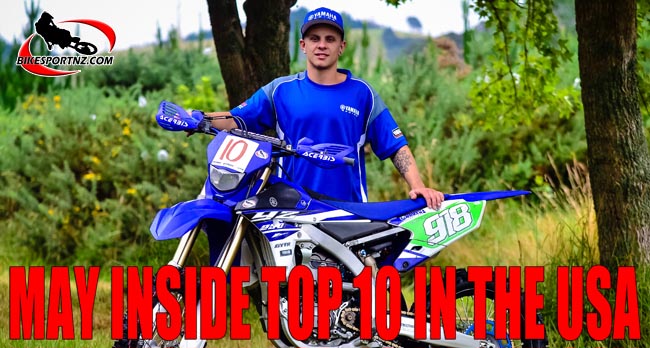 Auckland’s Callan May is beginning to find his rhythm in the United States.

The multi-talented dirt bike racer from Titirangi left for his base in South Carolina, on the American east coast, in February to get prepared to tackle the Grand National Cross-country Championships (GNCC) in the US, with plans to match or better the sixth overall result in the XC2 Pro Lites (250cc) class that he achieved on debut in the competition last season.

His first experience of the 13-round series in Florida was one to forget with bad luck forcing to settle for 18th in the class, not the kind of start he had wanted to his 2015 campaign.

But things were looking brighter for the Yamaha rider at round two of the series in Washington, Georgia, on Sunday (Monday morning NZ time).

“All week we heard rain was coming in heavy for this weekend, so we were all preparing for a muddy one,” May explained.

“The race was only two hours away from where we live in South Carolina, so we decided to drive down the morning of the race. That way we didn’t have to spend the night in the van and could have a good sleep at home.

“We arrived at the track around 8am and fortunately dad and I had bought gumboots the week before, because we needed them bad. The track was very muddy and the marshals had to re-route some of the bog holes because they were so deep.

“I had the 21st pick on the start gate, which wasn’t the best, but, because I didn’t finish top 10 at the previous round last weekend, there was nothing I could do,” said May.

“I got an average jump off the line going into the woods around 20th position. The first three laps I was tight and battling with the conditions. I was finding it hard to find traction and get good lines.

“By lap three and just after the pit stop, I managed to get moving and make some passes. I was in 10th going into the last lap with the rider in front one minute and nine seconds ahead. So I put my head down and went to work. I caught him three-quarters of the way around the course and managed to come home ninth in the XC2 class and 18th overall, the first Yamaha-backed XC2 rider.

“It’s not where I want to be but the depth of talent is crazy this year, so I have nothing to complain about being in the top 10. I can’t wait for round three at Steele Creek, North Carolina, in two weeks’ time.”

Russell now leads the XC1 class by 10 points from Strang.