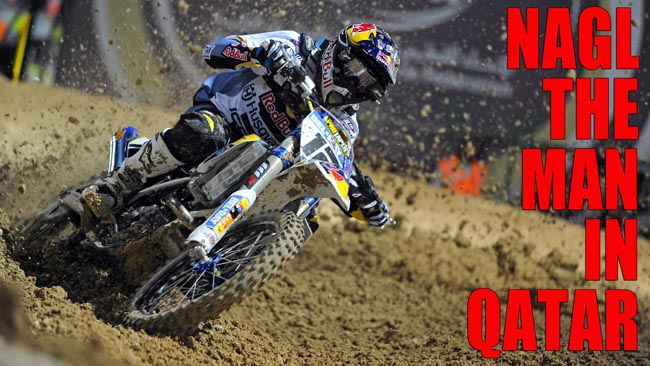 Most of the focus this weekend had been on the much-anticipated battle Italian defending MXGP champion Antonio Cairoli and American supercross champion Ryan Villopoto (world champion versus the United States champion) and on the comeback from injury of Herlings, but the spotlight soon switched to Nagl and his first big ride for the new Husqvarna team.

The riders, in the MXGP class at least, will perhaps now brace themselves for a backlash from Cairoli and Villopoto, fourth and seventh overall respectively after this series opener. Round two is set for Thailand next weekend.

Both MXGP and MX2 saw plenty of drama, although the biggest drama was seeing Villopoto get stuck on start gate and then he crashed twice in the first moto, although he did manage to fight through to finish ninth in the race.

In the first MXGP race, Nagl took the holeshot ahead of Cairoli, Shaun Simpson, Clement Desalle, Gautier Paulin, Jeremy Van Horebeek, Glenn Coldenhoff, Dean Ferris, Romain Febvre, with Steven Frossard in 10th place. Villopoto held down last spot after a horrible start after getting stuck at the start gate, then soon after also crashed after catching the back-markers.

Belgian Ken De Dycker went down hard and then British rider Nathan Watson also went down solidly in a separate incident. Nagl was on fire, pulling three seconds ahead of Cairoli, with Desalle a further second back and Paulin six seconds off the leader. On lap two Villopoto has moved into 19th position.

Cairoli and Desalle were in a brilliant battle for second place with Desalle going past as they jumped. Villopoto was working hard, passing Filip Bengtsson, Tommy Searle, Dean Ferris, Todd Waters and Davide Guarneri.

After five laps, Desalle has closed up on Nagl with just two seconds separating them, Cairoli was a further four seconds back. Villopoto made a mistake and all his hard work was undone as he dropped back to 19th spot.

Just like in Saturday’s MXGP qualification race, not a lot of passing was happening as riders generally held their positions. Villopoto moved into 13th spot, so a top 10 was very much a possibility for the American champion. His South African team-mate Tyla Rattray is into the top 20 in 19th spot.

Desalle has slowly caught up to Nagl and with two laps to go was just a second behind, Cairoli 10 seconds back, but the big news was the charge by Villopoto who was now into 12th spot and looking for a way past Strijbos and Frossard.

Villopoto also passed Frossard and tried the same on Philippaerts, but the former world champion closed the door hard on the current AMA supercross champ. Villopoto did get through for 9th spot and a handy 12 points.

In the second MXGP race, it was again Nagl who took the early lead from Paulin, Desalle, Strijbos, Cairoli, Van Horebeek, Villopoto, Simpson, Ferris and Frossard in 10th place. Searle was back in 17th spot, and Rattray again out of the picture. Finally the American has a shot at racing with the top GP riders.

After a lap, Nagl held a three-second lead over Paulin with Desalle a further second behind and Cairoli in fourth. Villopoto remained in seventh spot seven seconds off the pace after one lap, and was starting to get a little pressure from Febvre.

Lap two and Paulin, Desalle and Cairoli bunch up a little trying to chase Nagl, and Villopoto is now 11 seconds behind the leaders, just ahead of Febvre. Frossard pulled out of the race on lap three and Searle also out with his problematic thumb.

After five laps Nagl now has a lead of six seconds with Paulin, Desalle and Cairoli still locked together for that second place position. Then came Van Horebeek, Strijbos, Villopoto, Febvre, Philippaerts and Ferris in 10th.

Ten laps into the race and Nagl continued to show his speed, holding a little less than four seconds over Paulin, while Desalle and Cairoli were six and seven seconds behind. Febvre finally found a way around Villopoto for seventh place, dropping the American to 8th some 22 seconds off the pace of Nagl.

A nice battle back in the pack between Butron, Ferris, Coldenhoff, waters and Simpson with positions changing. Desalle worked his way past Paulin for second, but Nagl is now seven seconds ahead of the Belgian. Cairoli dropped off the pace a little in fourth spot and Villopoto is now 32 seconds off the pace of Nagl in 8th place.

Nagl got the moto and overall victory, with Desalle second in the race and on the podium, and Paulin finished third in the moto and was the last man on the podium after finishing with 38 points the same as Cairoli, but he had a better second moto result. Villopoto was 40 seconds off the pace after starting on the back wheel of the top guys. 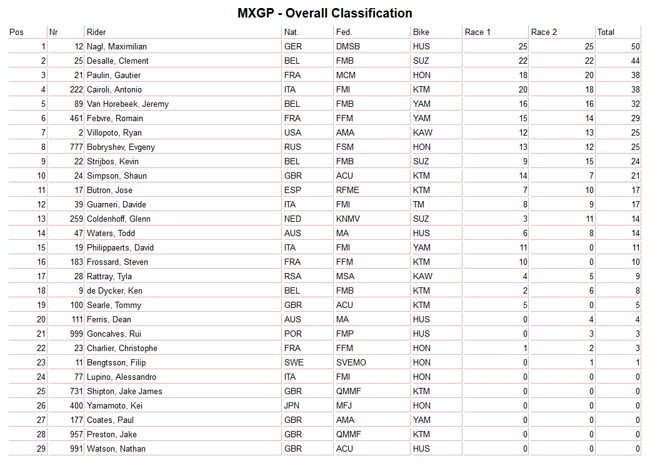 Dutch rider Jeffrey Herlings got a terrible drop from the gate in around 10th place on the first corner, but surprisingly the two Red Bull KTM factory riders Pauls Jonass and Herlings led into the opening lap of the MX2 first moto.

Jonass continued to lead into lap two, but it was Dylan Ferrandis who was making up time, passing Tonkov, Bogers and Watson to hold down fourth position on lap two. Tixier and Anstie were also on the move, Tixier moved into 8th place and Anstie 16th position.

By lap three Jonass remained in first place a second ahead of Herlings, although Ferrandis has passed Seewer for third and was closing in on both KTM riders. Tim Gajser was also flying as he moved into 6th place and Tixier was up to 7th.

Herlings started putting huge pressure on his teammate and passed him on lap four. Ferrandis also went past Jonass for second and set out after Herlings. Covington the star of Friday’s qualifier was down in 15th place as Anstie moved into 14th.

The battle for first place was intense as Ferrandis seemed faster than Herlings, but the nature of the circuit made sure the Dutchman continued to lead. The pressure from the Frenchman was crazy as he tried to duck up the inside and on lap five he did just that on a sweeping right hand corner.

Anstie moved into the top ten as he passed his countryman Pocock for 10th place. In third place Jonass was really getting a hard time from both Seewer and Lieber as the three battled for that position. Those three also seemed to be making ground on Herlings as his pace slowed a little.

Lieber passed Jonass for third position and Covington worked his way back into 13th spot. The lead by Ferrandis was now three seconds over Herlings, who had picked up his pace and had also moved away from Lieber in third.

Finding his rhythm Herlings began to get closer and closer to Ferrandis as Jonass was losing places fast, first passed by Seewer, and then Gajser. While Herlings had caught back up to Ferrandis, Lieber had caught Herlings and a three way fight for first place took place.

Herlings tried a couple of times to pass Ferrandis, but the one lined circuit didn’t really allow it, this also gave Lieber the chance to close in on the two front guys. Tixier also passed Jonass. Anstie moved into 9th place and Covington 11th.

After three or four corners of Ferrandis and Herlings more or less locking handlebars Herlings blew past in the air and quickly put a second between himself and Ferrandis. Gajser was into fourth place and Lieber was locked onto the back wheel of Ferrandis.

With one lap to go Herlings lead was two seconds, and the real action was going on for 4th, 5th and 6th positions between Gajser, Seewer and Tixier. Jonass continued to fade as he dropped to ninth position, handing Anstie 7th and Guillod 8th.

The second MX2 moto was another victory for Herlings as he first battled Dylan Ferrandis before walking away with the race and the overall. 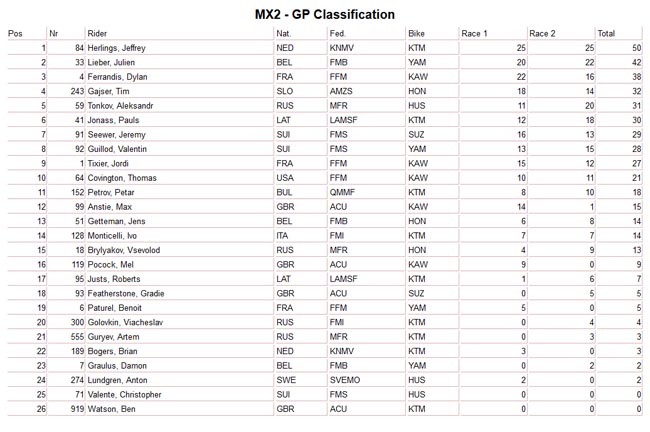