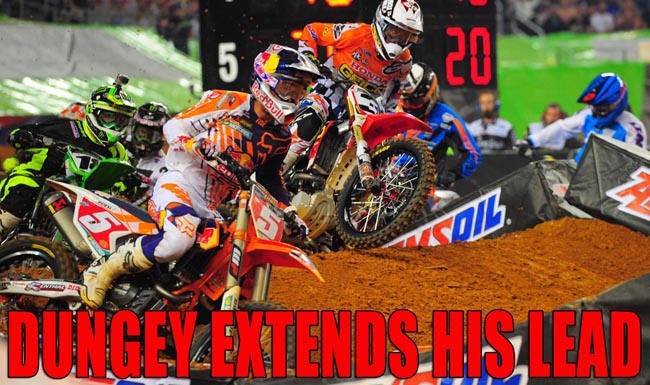 Racing in front of more than 53,000 fans, Red Bull/KTM’s Ryan Dungey became the first three-time Monster Energy AMA Supercross race winner of the season last night at the ‘Duel in the Dome’ at the Georgia Dome.

Red Bull/KTM’s Marvin Musquin led wire-to-wire en route to his second Eastern Regional 250SX class championship win of the season. This is the second time this season that KTM swept both main events.

Reed made a pass on Peick during the opening lap, but Peick answered back and took over the lead. Reed crashed on the second lap and remounted in 13th place. Honda’s Trey Canard took over the number-three spot on lap five, and on the same lap, Dungey passed Peick for the lead.

On lap six, Canard moved into second place, and on the next lap, Honda’s Eli Tomac moved into third place. Tomac passed the fellow Honda ride on lap 16, turning in his best finish since the third race in Anaheim. Canard finished third, his fourth consecutive podium finish. Reed went on to finish in seventh place.

In six of seven career starts in Atlanta, Dungey has six podium finishes and three wins. He now has 17 career wins and holds a 30-point lead in season standings.

“I was there on the start,” said Tomac. “Just to be here on the podium is huge for me. Second place is great, and I will go after the number-one position.”

Dungey’s second place at the first race in Atlanta and his win tonight earned him the inaugural “Duel in The Dome” trophy.

“With Marvin’s win [Musquin], it was perfect execution,” said Dungey. “The Honda boys were breathing on me, but I was able to put some distance between us as the race went on. Winning the ‘Duel in the Dome’ is icing on top of a great race.”

Musquin captured the holeshot in the Eastern Regional 250SX class main event with Kawasaki’s Joey Savatgy on his rear wheel. As Savatgy ran into traffic, his team-mate Arnaud Tonus took over the number-two position.

Musquin gave KTM their first-ever win in Atlanta and the sixth win of his career. Musquin now leads the championship by seven points.

“I made some passes in the early part of the race to get up front,” said Martin. “I tried to run Marvin [Musquin] down but he was the better man tonight.”

“Once again, the start was key to getting up front,” said Musquin. “I proved in my Heat Race that if you don’t get a good start, you can’t win. I was bummed with my second-place finish last weekend, so I am really happy to get this win tonight.”