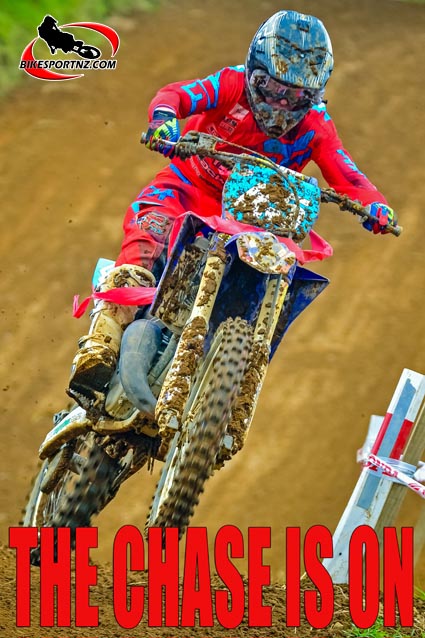 Taupo’s Cohen Chase is accustomed now to winning motocross titles – he’s won plenty over the past few years – but he has yet to crack the No.1 at senior championship level.

It is probably just a matter of time.

This year’s New Zealand Senior Motocross Championships will be his third attempt to do just that, after coming close to the top spot in 2013 and 2014, and already it is looking very positive for the just-turned 17-year-old.

Chase took his Total BikesportNZ.com Yamaha YZ125 to the top of the podium at the opening event of the four-round series in Taranaki on Sunday, his 2-3-1 score-card for the day enough to edge out defending national champion Josiah Natzke (CMR Red Bull KTM), who finished 1-1-8 after crashing at the start of the day’s final race (see photo below).

“It was definitely a good day for me,”: said Chase afterwards. “My starts weren’t that good today … I think I was trying too hard. But I made good passes in the second half of the races.

“I know it’s still a long way to go, but I feel confident I can win the title.

“There are a few small things I need to work on and, if I can find a couple of seconds per lap somewhere, I’ll be right there.”

Chase’s first senior campaign was when he tackled the 125cc class in 2013, impressively settling for fourth overall on that debut senior season.

He unfortunately broke his arm when he crashed at Tokoroa during his debut MX2 (250cc) class campaign last season and this year he has switched back to the 125cc class and tasted immediate success.

Chase has enormous experience at the ultimate level of the sport, having also raced in Australia – where he finished fourth in the junior national 250cc class last year – and in New Caledonia and Belgium as well.

The New Zealand Motocross Championship series continues at Timaru on February 22, with rounds to follow at Rotorua (on March 8) and Pukekohe (on March 15).