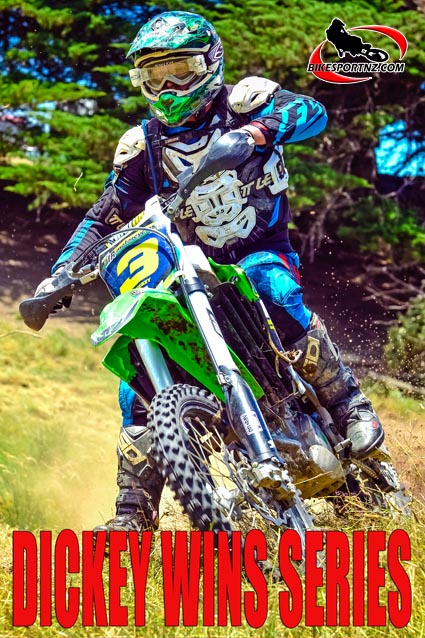 A runner-up finish on Sunday was more than enough for Kawasaki rider Jason Dickey to wrap up the Bel Ray Cross-country Series for 2015.

The 20-year-old Raglan dairy farmer took his 2015-model Kawasaki KX250F to finish fourth overall at the opening round of the series near Huntly back in December and he followed that up with a stunning win at round two near Huntly last month.

But his runner-up finish at the third and final round near Bombay on Sunday clinched the series outright for him as he led his two main threats for the crown – Hamilton’s Andrew Charleston (Honda) and Rotorua’s Scott Birch (Honda) – across the finish line.

Dickey was satisfied to accept runner-up spot on Sunday, behind Mokau’s defending champion Adrian Smith (BikesportNZ.com Yamaha), because he knew that Smith had virtually no chance of taking the title after he’d failed to finish the two-hour race at the previous round.

“I got a good start, in about fifth or sixth out of the gate, and was soon up behind Adrian Smith. I followed him for a bit and then took the lead before the end of lap one.

“But then Adrian got me back a lap later and, when I got stuck in a bog, he managed to stretch out a bit of a gap on me and I couldn’t catch him after that.

“I simply knew I had to keep an eye on where the guys were behind me, because it was Andrew (Charleston) and Scott (Birch) who I really had to beat.

“The laps were quite short, so it meant we were quickly into lapped traffic and that made things difficult too, but I got there in the end.”

However, Wightman’s 3-1-2 score-card for the series gave him the outright series win, finishing his campaign 15 points ahead of Summerfield, with Miller two points further back.

Dickey, Smith, Charleston, Birch and Goodwright, along with most of the other Bel Ray Series competitors, will now prepare to face-off again at the first round of four in this season’s New Zealand Cross-country Championships, starting near Onga Onga, in Central Hawke’s Bay, this weekend.

“I have had a few good results lately and it has been the best build-up I could have had.”