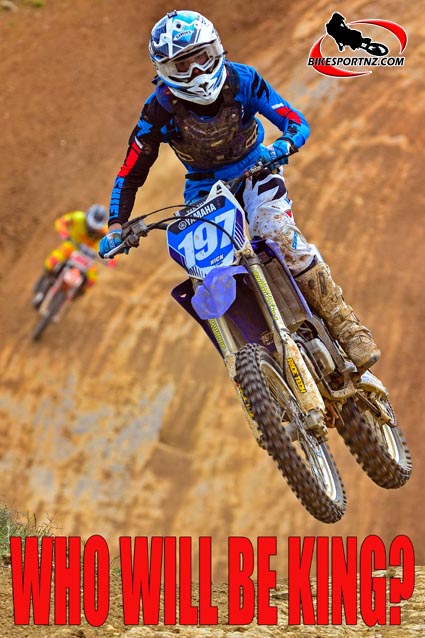 Racing in the shadow of Mount Taranaki will be fierce this weekend as some of the nation’s elite motocross riders challenge for the title “King of the Mountain” for 2015.

A slew of former and current national champions will arrive in the Taranaki region on Sunday for the big annual Mach 1 Yamaha-sponsored King of the Mountain (KOM) motocross, all of them capable of challenging for the crown.

What makes this year’s KOM event even more significant is that the venue, the popular Barrett Road Motorcycle Park facility, on the outskirts of New Plymouth, will also be the setting for the opening round of the nationals in just a few weeks’ time, on February 8.

With the big stand-alone New Zealand Motocross Grand Prix set for Woodville the following weekend (January 24-25) and the start of the four-round national championship series less than a month away, Sunday’s racing in Taranaki could be regarded as an ideal opportunity for title hopefuls to make a statement.

“With all these big events close together, the timing is perfect for riders this weekend. It will be a great opportunity for riders to establish a pecking order and to get a few sparks flying early in 2015,” said host Taranaki Motorcycle Club president Steve Holmes.

The entry list for Sunday’s event is already reading like a Who’s Who of New Zealand motocross, with riders coming from as far as Oamaru and Winton in the south, to Whangarei and Warkworth in the north, as well as from overseas, with British rider Rob Holyoak making the KOM his first hit-out on his 2015 tour.

Multi-time former national motocross champion Darryll King, of Hamilton, returns to the region where he grew up and honed his skills, before he headed overseas in the 1990s to tackle the world championship Grand Prix scene, and he is entered in both the MX1 (450cc) and veterans’ classes.

Two-time former KOM winner and national MX1 No.3 Brad Groombridge has signalled his intention to make the trip down from his Taupo base and he will also rate among the favourites to win the MX1 class, perhaps becoming the first man to win it three times in a row.

Otorohanga’s Hayden Kanters, a previous winner of the junior King of the Mountain feature race, is now racing in the senior MX2 (250cc) ranks and he can expect a stern challenge from Hawke’s Bay’s Kieran Scheele, another rider with vast international experience, and a regular frontrunner in the class, Rotorua’s Scott Canham.

The man who won the MX2 class at the annual Whakatane Summercross just after Christmas, Rotorua’s Mike Phillips, heads the line-up but it should also be worth watching out for solid performances from local riders such as Stratford’s Aaron Jane and New Plymouth brothers Blair and Callum Holdt.

For the nation’s motocross elite, the early weeks of summer can mean only one thing – lots of hard work. This is the time of year when national title contenders should start to see their weeks of training and testing begin to bear fruit, while, for others, lazy habits over winter may be starting to bite.

Questions are therefore now being asked – Who has prepared best? Who is strongest? Who is fastest? Who will rate among the favourites for a national title in 2015?

Perhaps those questions, and others, will be answered when the start gates drop at the KOM on Sunday.