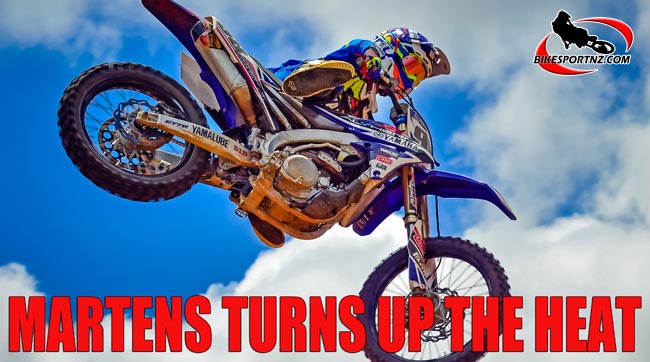 Auckland’s Ethan Martens is a former national motocross champion and he’d quite like to remove the word “former” from any description of him in the future.

With that being the case, the 23-year-old racer from Waitakere is certainly heading in the right direction.

Martens took his Altherm JCR Yamaha Racing Team YZ450F to finish the day outright winner in the premier MX1 class at the annual Valley Motocross Championships at Patetonga on Sunday.

He actually shared first place with his more senior team-mate from Queenstown, Scott Columb, but Martens got the nod for overall honours courtesy of the “count-back rule” – Martens finishing higher in the final race of the day.

Then, to make it a classic Yamaha 1-2-3, the third step on the podium went to multi-time former national champion Darryll King, the 45-year-old from Hamilton who also, unsurprisingly, won the veterans’ class at the popular two-day Thames Valley event.

King’s score-card in the MX1 class was 4-3-3-3 and he was unbeaten in his three races in the veterans’ grade the previous day.

“I’m taking every opportunity at the moment to ride and this event is another in my build-up for the nationals,” said Martens, who also finished a creditable fourth in the MX1 class at the annual Whakatane Summercross just after Christmas.

“I’ll be racing at the King of the Mountain motocross in Taranaki this weekend and then it’s the New Zealand Motocross Grand Prix at Woodville the weekend after that.”

The four-round New Zealand Motocross Championships kick off in Taranaki on February 8 and that’s when he wants to be at his absolute best.

“I’m not quite where I want to be in terms of speed and fitness, but I’m getting there. There is still a little bit of work needed.

“I spent a lot of time last year with (Altherm JCR Yamaha Racing Team boss and former GP racer) Josh Coppins and he helped me to change my riding style to suit the bigger bike. It’s becoming second nature now.

“It’s a bit of an art to ride a 450cc bike well. You can’t ride one of these bikes like a lunatic, you’ve got to be smooth.”

And it all seems to be working for Martens, who hopes one day soon to add the national MX1 crown to the titles he’s already won.

Full results from the weekend can be found here: