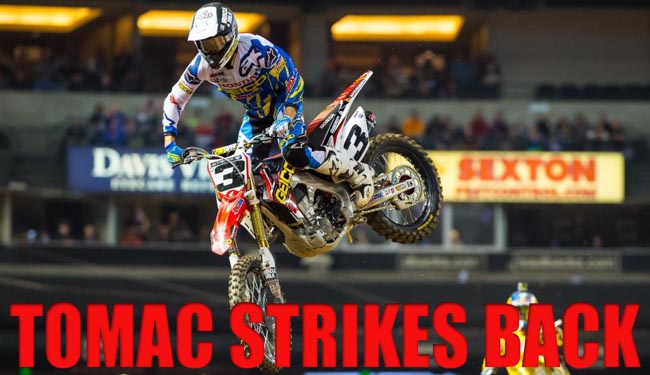 The journey to determine who is going to be the 2015 Monster Energy AMA Supercross champion in the United States took another turn at the second event of the season in Chase Field in Phoenix.

A thrilling battle between two of the sport’s rising stars led to the first ever 450SX class main event win for Honda’s Eli Tomac in front of a crowd of more than 49,000 fans.

In the Western Regional 250SX class, Yamaha’s Cooper Webb made it a night of firsts with his maiden victory, giving that division back-to-back first-time winners to start the season.

Roczen seized the opportunity to take over the lead early on the opening lap and established a multiple bike-length lead over Tomac. After biding his time searching for faster lines, Tomac began to close in and pressure Roczen, making his first pass for the lead on Lap 6 and setting off an exchange at the front of the field that brought the Chase Field crowd to its feet. Both second-year riders traded the lead several times over the course of two laps before Tomac made it stick on lap eight.

Once he assumed control of the position, Tomac was able to extend his advantage and win comfortably in his 15th start in the 450SX Class. Tomac also became the 58th different 450SX Class winner in Monster Energy Supercross history.

“That was one of the [most fun] races of my life and to come away with a win is a cherry on top,” exclaimed Tomac, who crashed twice in last weekend’s Main Event en route to a 20th-place finish. “To beat a guy like Ken [Roczen]; we respect each other and race each other hard. It’s just great. We definitely put our biggest effort into this [after last weekend’s misfortunes], and this is what he came out here to do.”

“I got off to a fast start but overall I didn’t feel the greatest tonight,” said Roczen. “I put it down the first 10 laps [or so], but then Eli got me. He rode better than me tonight, but I’m very happy to finish on the podium. We’ll do some work this week and come out next weekend looking to get a good start, ride smart and come away with another good result.”

The battle for third lasted nearly the entirety of the Main Event between Dungey and Yamaha’s Weston Peick. Despite starting up front with Roczen and Tomac, Dungey lost the position to Peick early and was unable to make up any significant ground until the closing laps, when he made the pass to finish on the podium on lap 17 of 20. It was Dungey’s first podium result of the season, while Peick’s fourth place finish was the best of his career.

Roczen maintains control of the 450SX Class championship standings, holding a nine-point lead over Dungey, who moved into second. Anderson sits third, 10 points behind. Tomac’s victory vaulted him from 20th to seventh, 21 points out of the lead.

As the three riders jockeyed for position, Stewart was able to take over the lead and open a gap while Webb battled with Osborne for second. With Stewart well out front, Webb made his way by Osborne by Lap 2 and methodically closed down the deficit to the leader. On Lap 4, Webb made his move on Stewart and checked out on the field, leading the final 11 laps to become the 98th different 250SX Class winner in the history of the sport.

“I got an awesome start and that helped a lot,” said Webb, who won in his 11th career start. “Phoenix was one of my favourite races last year, so to get it done here feels awesome. It feels good to [move into] second in points, but I’ll feel better to get that red plate [as the championship leader].”

Stewart maintained the runner-up spot to earn the best finish of his career, while opening race winner and current points leader Jessy Nelson put his KTM on the podium for the second consecutive week in third.

“It was great tonight getting my second [career] supercross podium and two [podiums] in a row to start the season,” said Nelson. “I feel great, I just had to battle there for six or seven laps. I’ll just need to work on some things for next week. We have a six-point lead and still have the red plate [as the points leader], so all in all it’s a good night.”

Nelson sits six points ahead of Webb, who moved from seventh to second with his victory, in the Western Regional 250SX Class championship standings. Kawasaki’s Tyler Bowers is third, seven points back following his fourth-place finish on Saturday.

Monster Energy Supercross continues next weekend with its third stop of the 17-race season from Anaheim, California. It marks the second of three visits to Angel Stadium.