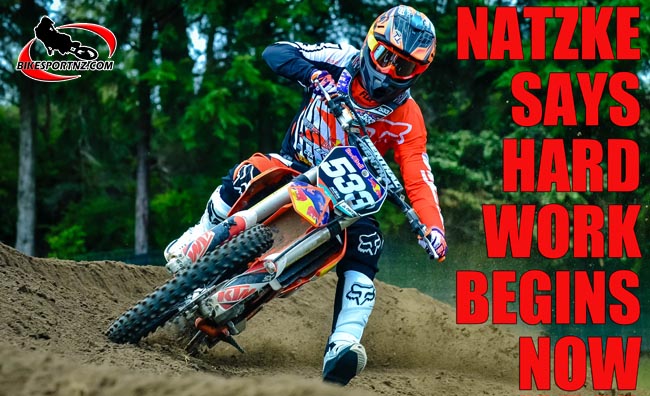 It is all going according to plan for Waikato’s Josiah Natzke.

On the verge of entering a new, exciting and very arduous international phase to his motocross career – with a factory contract signed up for him to race in Europe later in 2015 – the just-turned 16-year-old KTM rider has been keen to build his strength and speed and, with that in mind, he lined up for two separate bike categories at the weekend’s annual Valley Motocross Championships at Patetonga, near Morrinsville in the Thames Valley.

The Hamilton teenager was virtually unchallenging in winning eight races from eight starts on Sunday and was keen to report “I’m the fittest I have ever been in my life”.

Riding for the CMR Red Bull KTM Team, Natzke raced two different models of KTM bikes as he demolished all-comers in the MX2 (250cc) class and then scored four wins from four starts in the 125cc class as well.

“I grabbed the holeshot in seven out of the eight races,” he said. “I’m racing double the races during my time here in New Zealand this summer as I build up for Europe. If I make it hard for myself while I’m at home, it hopefully won’t be such a shock for me when I arrive in Europe.

“If I can push through the pain and fatigue barrier here at home, it will make 30-minute races in Europe a little bit easier on me.”

He comfortably won the 125cc class ahead of Taupo’s Wyatt Chase (Fox, MX Timing BikesportNZ.com Yamaha YZ125) and was similarly untroubled in winning the MX2 class ahead of Rotorua’s Michael Phillips (The Honda Shop Racing CRF250).

“I’m very happy with how my training has been going.”

Natzke’s next big outing will, be to race the annual New Zealand Motocross Grand Prix at Woodville in less than two week’s time, on January 24-25.

“I will race two classes at that event too, both the 125cc class and the MX2 class as well.”

Natzke is the 2014 New Zealand senior 125cc champion, becoming the youngest rider ever to win that title, in March last year, but now he has stepped up to the 250cc four-stroke bike to concentrate primarily on the MX2 class.

He will head overseas immediately following the four-round New Zealand Motocross Championships in February and March.