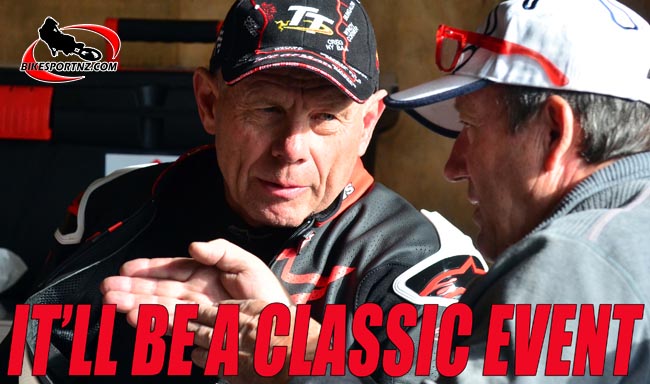 The eyes of New Zealand’s motorcycle race fans are set to turn once again to the Isle of Man where the 2014 Festival of Motorcycling gets under way.

As if the thrill of watching motorcycle racers tackle the challenging 37¾ mile Mountain Circuit every year in TT week is not enough, the Isle of Man Government has poured considerable resources into the annual August Manx Grand Prix to create a substantially new and up-market event designed to complement the popular June Tourist Trophy (TT) meeting.

The Manx Grand Prix began in 1923 using the same circuit as the TT. Until 1930 it was called the Amateur TT, open to riders who had never competed in an international event, nor a Tourist Trophy race, were from the United Kingdom and rode strictly stock machines.

It remained effectively a low-key amateur event in stark contrast to the professional super-stars that made up the TT meeting. In earlier days it was possible to point to Manx Grand Prix winners such as Bob McIntyre, Geoff Duke and Phil Read, and see them later feature at the TT and in World Championships.

No such stars emerge from today’s Manx races, one reason being that international licenses which qualify first-timers to ride at the TT meeting are easier to come by.

Two years ago the Isle of Man Department of Economic Development revamped the Manx Grand Prix meeting with new proposals to see the event focus on motorcycling nostalgia, and to provide a training ground for future TT riders and newcomers to the Mountain Circuit. The proposals were also designed to ensure increased value for money for riders, while delivering an event generating greater economic benefit, commercial revenues and media coverage to ensure its long-term viability.

Re-named the Isle of Man Festival of Motorcycling the new format includes races for classic machines and modern-day bikes, parade laps by current and former TT champions, and historic motorcycle displays. The Manx Grand Prix races are still included. Famous riders on famous machines are set to become an ever present feature of the Classic TT. The inaugural festival last year was an outstanding success, attended by a large number of New Zealander’s including riders and supporters.

Many New Zealander’s will be back this year as well while two of our TT heroes, Bruce Anstey and Graeme Crosby are set to be star attractions. Anstey failed to add to his nine TT wins back in June, despite four podium finishes and two fourth places from his six starts, but in the Senior TT he etched his name into TT history by becoming the first rider ever to top the 132 mph lap average.

Nobody has ridden around the Isle of Man course faster than the quiet Wellingtonian.

And he will be in action on two machines, a 1962 500cc Manx Norton and an ex-factory YZR500 Yamaha Grand Prix bike, a twenty year old machine identical to those ridden in past 500cc world championships by Wayne Rainey, Eddie Lawson and Randy Mamola.

In the words of the organisers, now planning to make the festival the most prestigious classic meeting in the world, “the Mountain Course will reverberate to the wailing sound of the two-stroke Yamaha which will, without doubt, be one of the most exotic bikes to have tackled the 37¾ mile circuit.”

The Manx Norton is a Ken McIntosh machine out of Auckland previously ridden successfully by Kevin Schwantz, Cameron Donald and Andrew Stroud. In the hands of Anstey in last year’s festival it was the fastest single-cylinder bike but failed in the latter stages of the four lap race.

This year Anstey will be chasing the Mike Hailwood Trophy for 500cc single-cylinder machines, on a Manx Norton now appropriately modified by McIntosh for this year’s race.

Graeme Crosby, triple TT winner and former double World Champion will be campaigning his championship winning XR69 F1 Suzuki in the Classic TT Lap of Honour and in the Joey Dunlop Rivals Parade Lap. In 1981 Crosby won both the F1 and Classic TT’s on the same machine.

The Aucklander was a hugely popular rider with the Isle of Man fans and his return to the Island with the 997cc four-cylinder four-stroke F1 Suzuki will be a highlight.

And there will be huge interest as well, notably from the New Zealand media, in the performance of his travelling companion and Isle of Man novice Grant Dalton, of Emirates Team New Zealand yachting fame (pictured above, left, with Graeme Crosby). Dalton has been putting in qualifying track time at race meetings in New Zealand in recent months on his own replica XR69 Suzuki and is being mentored by Crosby in his Isle of Man debut.