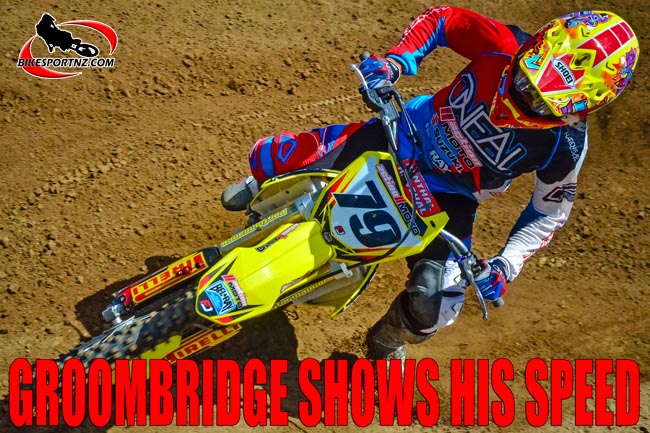 Intensive, high-speed race action saw new champions crowned in half of the 16 separate championship categories at the 15th annual New Zealand Mini TT Championships near Kuratau, at the southern tip of Lake Taupo, at the weekend.

Most notable among the winners at the Bike Torque Yamaha TT nationals was Taupo’s Brad Groombridge, who again made it a double by winning in two separate senior classes when he dominated both the MX1 class and the Enduro class as well at the popular two-day event.

TT racing is like superbike racing on soil instead of tarmac – the racing is off-road and the competitors use dirt bikes but, unlike motocross, there are no steep hills or jumps to slow things down – and the event attracts entries from across all the motorcycling codes, including the stars of motocross, cross-country, enduro and even road-racing.

Motocross ace Groombridge is no stranger to winning in the flat track environment, after he had previously won the MX1 and MX2 titles at the TT nationals in 2010, but, for many of the other competitors, it was the first time they’d stood on the top step of the podium.

“It was an awesome weekend of racing, with some mixed track conditions and there was some heavy rain at times,” said Groombridge.

“It was great fun riding in the enduro bikes class, which was something a little bit different for me because I was coming up against riders I don’t usually face.

“I was stoked to come away with two class wins.”

And, while there was a flurry of fresh winners, there were also a handful of repeat winners at Kuratau.