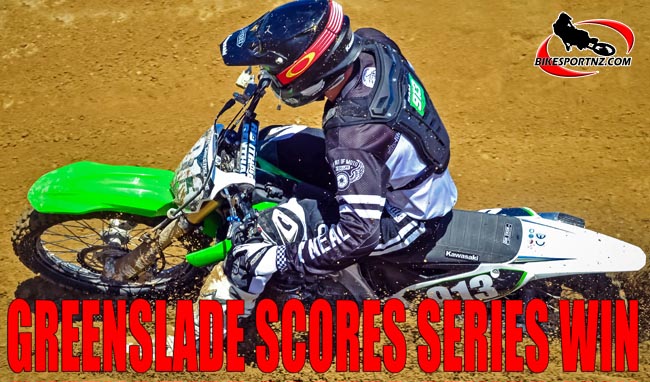 Auckland’s Sam Greenslade has shown once again that consistency counts for everything when it comes to off-road motorcycle racing.

The multi-talented Kawasaki ace from the North Shore outlasted and outsprinted many of New Zealand’s leading dirt bike exponents when he won this year’s big annual Dirt Guide Cross-country Series, which wrapped up with the third and final round near Atiamuri on Saturday.

Greenslade was consistently among the leaders throughout the series and, although he didn’t win a round outright, he was twice on the podium and his worst finish was still a respectable fourth overall.

Titirangi’s Callan May (Yamaha YZ250F) won Saturday’s final two-hour race ahead of Power – with Greenslade borrowing his sister’s Kawasaki KX250F to settle for third overall – but this was May’s only appearance in the series and so he was no threat for the outright crown.

Greenslade posted a 2-4-3 score-card for the series win, with Power’s 12-2-2 results earning him the No.2 step on the podium and Smith went 1-3-22 and had to settle for third outright.

“I guess consistency paid off,” said the 23-year-old Greenslade afterwards.

“I finished second at round one and was leading the race at round two when I hit a tree and crashed. I still managed to finish fourth that day.

“I needed a bit of luck too, just to get to the start line for round three on Saturday. Parts hadn’t arrived for my Kawasaki KX450F and so I had to borrow my sister’s KX250F. I was winging it a bit because her bike wasn’t really set up for me. I swapped over the handlebars to put my ones on her bike, but that was it basically.

“I’m pretty happy, though, to win the series in the end.”

Buxton scored 2-1-1 results for the series to win the intermediate class outright, while Marsh’s 4-4-2 score-card earned him the overall runner-up spot.

In the junior race staged earlier in the day, Oparau Kawasaki ace James Scott (Kawasaki KX85) led from the start and kept Auckland’s Jake Wightman (KTM EXC 125) behind him for the opening lap. Wightman eventually snuck past when Scott overshot a corner and he pulled away to win by two minutes, Wightman taking the overall series win for the second year in a row.