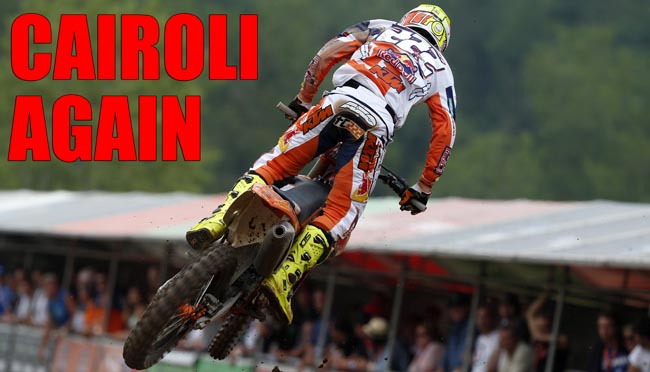 Round 13 of the FIM Motocross World Championship in Hyvinkää was a tough one for all concerned.

The track was unforgiving with the track featuring a full variety of dirt compound and obstacles, putting not only the riders to the test, but the teams as well as they strove to find the perfect suspension set up and tyre choice to suit the circuit which proved to be more or less indecipherable.

It’s a well-known fact that it is ‘the tougher the better’ for Red Bull KTM Factory Racing’s Antonio Cairoli, who is undoubtedly one of the most technically gifted riders in the world.

The Italian pulled two holeshots and dominated both races for his seventh overall victory this year.

“I think this track was one of the toughest we have had so far, it was very bumpy and difficult but it was nice for me to get the holeshot, it always makes everything easier and I have been working hard on my starts this year and it seems to be working well,” he said.

It has been a while since we have seen Monster Energy Kawasaki Racing Team’s Steven Frossard on the box, but finally he made it after charging mega hard all day for two top three finishes. Despite crashing in race two, the Frenchman bounced back hungrier than ever to take second for second overall.

The third step of the podium was hard fought today for Rockstar Energy Suzuki World’s Kevin Strijbos who stood on that same step for the sixth time this year.

Strijbos admitted the day was difficult and very physically demanding saying: “after the first race I was out of power, I felt like I had already raced three heats and then I had a really bad start in the second heat, so I was like dead last, I just thought to myself I need to save energy and then push at the end and that’s what I did so it worked out ok.”

Proving just how testing the circuit here in Hyvinkää is, Yamaha Factory Racing’s Jeremy Van Horebeek uncharacteristically crashed in race two and destroyed the front end of his bike. A pit stop with some quick repairs, the Belgian gritted his teeth and soldiered on despite his handlebars being insanely bent.

Remarkably the 24-four year old managed to salvage 10th place, which in combination with his second place in race one, rewarded him with fourth overall.

Out of the eight rounds Team HRC’s Max Nagl has contested, he has banked seven top five finishes with Sunday’s fifth overall being the seventh.

Meanwhile performance of the day has to go to Red Bull IceOne Husqvarna Factory Racing’s Dean Ferris who, after nine months off of racing motocross and only just recovering from injury, proved he is a real force in the MXGP class after mixing it with the top five in both motos to take home sixth and fifth for sixth overall.

What more can we say about Red Bull KTM Factory Racing’s Jeffrey Herlings? The kid’s riding speaks for itself as he dominated both races by over a minute to take home his forty-third MX2 Grand Prix overall at the tender age of nineteen.

With his double victory here today, it’s more than likely the Dutch sensation will claim FIM MX2 World Title number three at the next round of MXGP in Loket, Czech Republic.

Another solid result for Honda Gariboldi rider Tim Gajser, who claimed his fourth podium finish of the year with a second overall.

Looking at the championship standings, the Slovenian is in fifth; only thirteen points shy of Dylan Ferrandis in fourth and a further three from in Romain Febvre third. The 17-year-old said, “I know I have closed the gap to third and fourth, so I will work hard to try and get there.”

Despite being a little black and blue with bruises from yesterday’s huge crash in qualifying, Red Bull KTM Factory Racing’s Jordi Tixier toughed it out today to take second and fourth for third overall.

Meanwhile it was a very frustrating day in the office for CLS Kawasaki Monster Energy’s Ferrandis, who charged hard in race one to cross the line in second only to be penalised for passing on a waving yellow flag which dropped him back to 12th after a deduction of 10 positions. In race two the Frenchman redeemed himself with a second place he could keep, landing him in fourth overall.

Yamaha Factory Racing’s Christophe Charlier battled the gnarly conditions all day long with a hard fought fourth in race one and a 10th in race two for fifth overall and his best result of the season.